Flying Missile Defense? The F-35 Stealth Fighter Can Do Everything 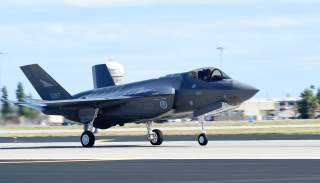 Add another mission to the F-35.

On top of being a stealth fighter, bomber and airborne quarterback coordinating other aircraft, now it’s a missile defense sensor. The U.S. Army recently incorporated Air Force F-35s into its missile defense system.

“Two U.S. Air Force F-35s were integrated with the U.S. Army Integrated Air and Missile Defense Battle Command System (IBCS), providing an airborne sensor capability to successfully detect, track and intercept near-simultaneous air-breathing threats in a test at White Sands Missile Range, New Mexico,” according to an announcement by Lockheed Martin, manufacturer of the F-35 and a member of the multi-company team working on IBCS. “The December 2019 test marked the first time F-35s were used as sensors during an IBCS live-fire test against multiple airborne targets.”

“This test represents a major milestone for multi-domain operations by leveraging airborne assets to detect and track threats that can then be countered with ground-based effectors. This demonstrates a tremendous capability to defeat threats that are terrain masked or beyond ground-based sensor detection capabilities due to terrain and curvature of the earth,” said Jay Pitman, vice president, Lower Tier Integrated Air and Missile Defense at Lockheed Martin Missiles and Fire Control.

The December 2019 test follows an August 2019 Air Force exercise in which an F-35 transmitted tracking data to IBCS.

However, while the F-35s detected airborne targets, it’s not precisely clear what they detected. Lockheed Martin referred to “air-breathing targets,” which suggests drones or cruise missiles with air-breathing engines, rather than ballistic missiles.

Nonetheless, there are four key points here. The first is simply the idea of using aircraft as elevated radar stations. They can peer down to detect low-flying missiles and drones whose approach would otherwise be masked from ground-based radar by terrain or the Earth’s curvature.

But using fighters as airborne sensors for ground-based defenses against drones and missiles is an intriguing idea. That’s the sort of mission meant for the big E-3 AWACS and E-8 JSTARS airborne early warning aircraft, which can use their powerful radars to detect cruise missiles. But there are only a few dozen of these flying radar stations, they’ll be prime targets for the enemy, and they’re likely to have more pressing tasks in wartime than spotting drones.

While their radars are less powerful than those on the AWACS, the F-35 will be the backbone of American tactical airpower: with 2,400 or so potentially on order, there’s bound to be one available as an airborne spotter for ground-based air defenses. Interestingly, the Air Force is also mounting new radars on old F-16s that will enable them to detect drones and cruise missiles.

The Army tests also highlight what’s supposed to be the F-35’s strong suit: its sensors – including AESA radar, infrared and cameras – and sophisticated networking capabilities. If the F-35’s numerous current bugs can be fixed, then it should be capable of serving as early warning for ground-based missiles and lasers, or jammers to stop enemy drones.

Finally, missile defense also expands the repertoire of F-35 missions. It’s not uncommon with controversial weapons for the military to find tasks to justify their cost. The F-35 wasn’t designed for missile and drone defense, but this task will likely be used as one more reason to continue the procurement of the aircraft.

Michael Peck is a contributing writer for the National Interest. He can be found on Twitter, Facebook. or on his personal Web site.