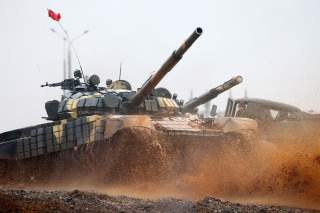 Key point: The T-72B3 can be flown to the battlefield and is made to be networked with Airborne Troops.

The Russian Airborne Troops (VDV) are famous for their usage of the BMD and BTR-D series of airdropped armored vehicles. But in 2018, the VDV’s 7th Novorossiysk and 76th Pskov air assault divisions received T-72B3 tanks to bolster their firepower. While tanks were attached to VDV units on a limited basis during the Soviet war in Afghanistan, this marks the first time main battle tanks have been formally attached to a VDV unit. Interestingly, these tanks are not standard T-72B3s, they have special equipment to network with the VDV’s battlefield networks.

But what advantages do the airborne T-72B3s have? How could the addition of heavier tanks to VDV divisions affect the threat they pose?

While there are many variations of the T-72B3, the airborne ones have the most up-to-date engine and armor packages. This means that the filler of the explosive reactive armor (ERA) blocks on the turret are Relikt, granting better effectiveness against threats than earlier T-72B3s, which only had Kontakt-5. The engine is also the latest V-92S2F, with 1132 horsepower.

But the most important, and airborne exclusive upgrade is the Andromeda-D battle network. Andromeda is a battle network that’s deployed practically exclusively with VDV vehicles. The system was tested in exercises in 2011 and 2012,  and deployment began around 2013, with the first sets being installed on BTR-MD, BMD-4 and truck units.

The system itself serves a similar function to the U.S. Army’s Force XXI Battle Command Brigade and Below (FBCB2) system, although it details of how it’s implemented are slightly different. Andromeda uses GLONASS to determine the position of every Andromeda equipped vehicle, then relays that position, via ground radio networks to Andromeda command posts, where they can be viewed.

Information on the repair and ammunition status of each vehicle, spotted enemies and artillery coordinates can all be passed through the Andromeda command net, allowing commanders to have a better picture of an ongoing battle and react faster. The latest versions of Andromeda are said to use satellite communications for increased area of coverage, and increased capability like video calls and video conferencing between command posts.

Implementation of this capability into airborne T-72B3s would make them far more aware and reactive than regular T-72B3s. While the majority of the Russian army has a battlefield network of their own, reports on its implementation suggest that it is far less proliferated compared to Andromeda.

The addition of T-72B3s to the VDV’s air assault brigades means that the VDV air-assault divisions will be far better at sustaining attacks. Most VDV units are already equipped with top of the line air defense, infantry equipment and self-propelled artillery, so the addition of an MBT makes a VDV air-assault division one of the best-combined arms formations in Russia’s arsenal.

The rapidly air-transportable nature of these divisions means that they could rapidly be deployed to a conflict on Russia’s borders. This could allow for a one-two punch of a paradropped VDV division, followed up by an air-assault division in the event of a Russian intervention.

While Russia’s Andromeda may not be battle tested like FBCB2, its implementation makes these divisions theoretically on par with most of their American and European counterparts in battlefield networking capability. The old perception of the Russian/Soviet military as being inflexible should be challenged in light of these technological developments and the doctrinal reforms that prompted them.

Charlie Gao studied political and computer science at Grinnell College and is a frequent commentator on defense and national-security issues. This first appeared in April 2019.