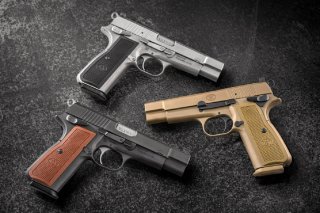 It was almost a century ago that legendary American gun designer John Moses Browning began to work on what would be his final firearms design – the Browning Hi-Power. The handgun was still unfinished when Browning died in 1926, but it was subsequently completed by Dieudonné Saive at Fabrique Nationale (FN) in 1935. It was quickly adopted by the militaries of Europe and had the unique distinction of being used by both Allied and Axis forces during the Second World War.

Even in the era of polymer-framed pistols, the Browning Hi-Power has such a proven and time-tested design that, thanks to improvements and enhancements, it has remained the standard service pistol for the Belgian Army, Indian Army, Indonesian Armed Forces, Australian Defence Force, Argentine Army, Luxembourg Army, Israeli Police, and Venezuelan Army.

For 2022, FN America has announced a completely "reimagined" model – the FN High Power – that is based on the design conceived by Browning and perfected by Saive.

"The High Power is such an iconic design, and synonymous with FN really. We recognized the gravity of reintroducing this newly redesigned pistol with such a storied history," FN America president and CEO Mark Cherpes said in a press release. "Rather than introduce a clone of the original, we had to deliver much more than other brands, knowing the FN High Power would be held to a higher standard. FN pays homage to the prolific design, while modernizing the ergonomics, functionality and operation. We respect what this pistol has meant to generations of FN collectors and feel the new FN High Power dovetails perfectly with the rest of the FN pistol line, carrying a future-forward design to the next generation of shooting enthusiasts."

The FN High Power retains a distinct design in the metal pistol category thanks to its signature keyhole muzzle profile, tapered slide, longarm slide release and rounded hammer. All of those features, which are ubiquitous with a FN High Power, have been integrated into the new design.

Among the most notable improvement is the increased magazine capacity to 17+1 rounds; while ambidextrous controls aid in the overall operability. The elimination of the magazine disconnect makes for a single-action trigger that breaks crisply and cleanly. The new FN High Power also offers dramatic improvements to the handgun's ergonomics and fire control design, accuracy and increased magazine capacity, besting any attempted "clone" of the original.

"FN conducted a thorough historical design study into the classic High Power design to identify what truly makes High Power what it is," added John Ryan, director of product management for FN America, LLC. "These features set the design apart from other metal pistols in the market and were extremely important for us to include in the modern evolution of the new FN High Power so as to pay respect to the significance of Browning's original design."

The new version of the FN High Power is being officially revealed at this week's SHOT Show (Shooting, Hunting, Outdoor, Trade Show) in Las Vegas.