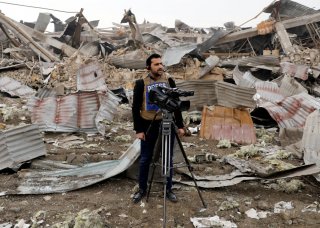 As the war in Afghanistan rages on between the Taliban and Afghan security forces, one frequently-cited feature in Western media coverage has been a series of color-coded maps describing areas of control. These graphics attempt to simplify a complex, decades-long war for the general public, most of whom are unfamiliar with Afghanistan’s history, topography, demography, and other characteristics. In the absence of independently verified data from the battlefield, these easily digestible graphics seem to show sweeping Taliban gains but are compiled almost entirely on the basis of Taliban claims, with little to no reference to Afghan government statements or statistics. Routinely used as a source by many news agencies, such maps may mislead news consumers worldwide and also impact Afghan lives, public opinion, and potentially the outcome of the war. Yet, these maps seem to have little connection to reality and have yet to clearly define what “control” means, or how the colors equate to governance.

Much has been said of the fog of war and how real-time reports are rarely accurate in the best of circumstances. The military even has an adage for this: “The first report is usually wrong.” While the adage refers to fast-changing battlefield conditions, it is made far worse when the maps and reports are manipulated. The four-decade-long Afghan war, complex in nature, has always been characterized by competing narratives, with media, at times, unwittingly spreading disinformation.

“If you make representation about territorial control based on the claims of a terrorist organization, often echoed by the media that itself lacks access to such areas to verify, then you have made a representation about a reality that is fluid, often changes, and remains fundamentally unverified,” said Ahmad Shuja Jamal, head of international relations and regional cooperation at Afghanistan’s National Security Council. “Even where the boundaries on the map often differ between the official cartographic maps and what the terrorists use. For example, several districts in Uruzgan province are labeled by Talib terrorists as being in Daikundi province so they can claim that they control territory in a province that is 100 percent under government control.”

In 2009, the Taliban began to demonstrate their prowess at rebranding by marketing themselves as a patriotic anti-imperialist movement and manipulating information to discredit the Islamic Republic of Afghanistan as a weak “puppet regime.” By 2011, the insurgent group’s robust social media campaign marked “a distinct new front in their asymmetric battle; one waged not with bullets and bombs, but with English language posts on Twitter.” Few in the press, the NATO coalition, and even fewer in the Afghan government refuted or questioned Taliban claims with success.

This prowess has continued with the issue of territorial gains. According to Jamal, “Five Talibs taking selfies in a district center does not represent any kind of control, especially when they are almost always driven out in a matter of hours. Taliban have shown their penchant for grossly exaggerating their control. For nearly half a decade, they have been claiming 70 percent control. They recently upped their claims to 85 percent of the territory, a claim so bogus even armchair pundits in DC debunked it.”

Mis- or disinformation has a direct battlefield effect as a loss of morale by citizens and soldiers poses a real threat to Afghan forces fighting under arduous conditions. Psychological warfare can also be facilitated when journalists play into insurgent narratives by reporting that the war is sure to be lost, running such alarmist headlines as “District after district falls to the Taliban.” Even former U.S. National Security Advisor General H.R. McMaster recently panned U.S. media for their “disinterest and defeatism.”

In fact, the recent Taliban offensive operation has been characterized by such large Taliban casualty numbers that Taliban leaders are floating a three-month ceasefire offer which Afghan government sources say is an indication that the Taliban are being decimated on the battlefield and seek to staunch their losses by freezing battlefield positions. Yet, little of this is reported, and it may not matter as the world media is fixated on “The Taliban Offensive” quickly gaining ground, while ignoring the rapid pace in which the Afghan National Defense and Security Forces (ANDSF) has retaken those same areas.

The Islamic Republic of Afghanistan should have perfected its communications capability years ago, but it isn’t too late to improve. Winning the war of words is every bit as important as tactical victories.

According to government reports, the ANDSF are dislodging the Taliban from locations the Taliban have freshly occupied, and they have inflicted casualty rates never seen before. If the press does not report this, despite daily Ministry of Defense reports, the Afghan government must write commentary in the Western press, invite Western (and Afghan) reporters to daily one-on-one interviews, and answer every invitation to talk to reporters. As important, the government must recognize the inherent skepticism of the media and must dedicate aircraft and security to get reporters to battlefield locations to make independent verification of facts on the ground.

Even the most ardent Afghan government supporters concede this time that the Taliban’s propaganda push is different and more effective. NATO troops are withdrawing, and by September, the Taliban media apparatus will declare total victory. They have plenty of material to work with: video, audio, and print. The Taliban will make a huge push in the coming months to show they are still capable despite the daily losses to the ANDSF, and the departure of U.S. forces will be a boon for their narrative. The foreign press must be vigilant and actively verify battlefield reports disseminated on social media by Taliban accounts in order to avoid accusations of parroting propaganda or fake news.

Fighting through the fog of war and Taliban disinformation efforts must be done on both the physical and the information battlefield. The Afghan government is faced with the colossal challenge of building both a narrative and an effective counter-narrative. While

many may say any government effort will be too little, too late, the importance of rebutting Taliban propaganda must still be a priority for the Afghan government and seen as no less important than combat operations. Even though the ANDSF have superior numbers, superior weapons, and aircraft, this balance is generally irrelevant on the information battlefield, one where superior skill in visuals, social media, and narrative will win. As one Afghan officer quipped, “Every Talib has a cell phone, and they are using them more than us.”

The fate of the republic may depend upon this battlespace.

Tanya Goudsouzian is a Canadian journalist based in Istanbul. She has covered Afghanistan since 2000.

Jason Criss Howk is a writer and retired US Army FAO (foreign area officer) who has worked on Afghanistan issues since 2002.