Forget About Stealth B-21 Raiders for Australia: What About an A2/AD Strategy? 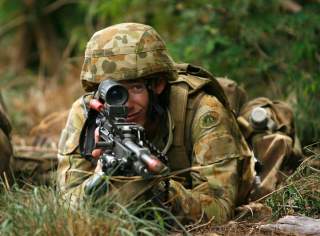 Andrew Davies asked who we’re going to strike, and why, and suggested that having additional strike power could get us into a dangerous situation that we might not be able to get out of. Hellyer made the case that long-range strike would raise the cost for any adversary—specifically China—that sought to operate close to Australia’s maritime and air approaches, including from facilities hosted by nations in our region.

Alan Dupont, writing in The Australian a few days later, argued that a balanced force is needed and that airpower should not be prioritised over ground forces. He dismisses the idea of the RAAF acquiring a long-range bomber such as the B-21 Raider and says that we need to ‘get serious about using unmanned strike aircraft in tandem with smaller, dispensable drones, land-based, long-range precision guided munitions and ballistic missiles all of which can be turbocharged by artificial intelligence’.

Dupont also argues that continued investment in the US–Australia alliance is critical, and notes that the Australian Defence Force has demonstrated operational flexibility in providing support to counter a variety of threats in the Middle East, Afghanistan and the Indian Ocean. Those skills remain pertinent even in an era of heightened great-power competition.

But this debate is not just about platforms or even a specific capability. It’s really about our military strategy in an era of rapid and unpredictable change, as Paul Dibb has pointed out. Is the military strategy upon which the 2016 defence white paper, and preceding white papers going back to 1987’s The defence of Australia, are based still relevant to today’s deteriorating strategic outlook?

As I’ve said before, I’m not convinced that continuing to rely on a ‘moat’ (the so-called sea–air gap) as the basis for defending Australia is credible in the face of the new military technologies—such as long-range conventional ballistic- and cruise-missile systems, hypersonic weapons, and advanced air and naval capabilities—now appearing in the region, particularly in China’s military forces. The recent report by the US–China Economic and Security Commission, which covered China’s military space capabilities, noted that the ability of the People’s Liberation Army to generate military effect through space and cyberspace is growing. That will make the sea–air gap narrower and less defensible by traditional platforms.

Dupont emphasises the need to reinvest in the US–Australia alliance under more adverse strategic circumstances, but how we achieve that is an important question. Leaving the US to sail into harm’s way, perhaps during a crisis over Taiwan in the next decade, because we lack the means to project power rapidly alongside its forces won’t strengthen the alliance. A better answer is to raise our strategic currency in Washington by acquiring new capability to directly share the defence burden quickly, precisely and decisively.

Ignoring the issue of the strike gap risks our not having the means to support the US at some future critical hour. This is not to say that the ADF as it’s currently configured, or with the future force structure in mind, is incapable of contributing to a coalition operation. Both the Hobart-class air warfare destroyers and the Hunter-class future frigates can ‘plug into’ US taskforces, and the Attack-class future submarines will also be able to make a valuable contribution. However, the first of the submarines won’t appear until 2034 at the earliest, and we won’t have the first frigate until the late 2020s. Because our current naval surface-warfare capabilities don’t have a credible long-range land-strike or anti-surface-warfare system, they would have to go well within the range of China’s missiles in its anti-access/area-denial (A2/AD) envelope to deliver a limited strike.

A more fundamental issue is whether events will have decided the outcome of the Indo-Pacific strategic contest well before the ADF’s future force is in place. Related questions include how advances in unmanned systems and hypersonics will transform the operational environment and whether legacy platforms will be able to keep up.

Hellyer’s analyses of options for projecting power (here and here) demonstrate that in terms of the RAAF’s strike and air combat capability, the current and planned forces, while technologically advanced, lack the range, persistence and payload to meet an increasing challenge to the region from a rising China. Having access to forward air bases will help, but it will also increase costs because our forces will then be located well within China’s expanding A2/AD envelope.

Debating the case for long-range strike implies building an A2/AD capability that emphasises projecting power forward rather than continuing a narrow denial strategy that surrenders the initiative to our adversaries. They can deploy their forces out of harm’s way and choose the time and place to strike at our critical defence facilities in the north unmolested. We are then left trying to defend our territory and airspace, or our expeditionary naval forces, against their cruise- and ballistic-missile capabilities. Our defences get swamped, ships are sunk and our bases are destroyed.

Long-range strike gives us the basis of a credible A2/AD capability for the ADF that raises the cost and operational complexity for any major-power adversary, contributes towards strengthened non-nuclear deterrence, and reinforces the US–Australia strategic alliance.

Certainly, there are no quick, cheap fixes for the strike gap. All the options—B-21 Raider, land-based ballistic missiles and long-range unmanned combat aerial vehicles—have cost, developmental and political implications that we can’t ignore. But accepting the strike gap means also accepting that we are less able to support our essential ally in a much more contested environment against a peer adversary that is clearly intent on directly challenging both the US’s and our security interests. Strengthening the alliance in a clear, decisive and highly visible way would signal to Washington that we will not be a free rider in a much more dangerous future.