Forget A Bailout: Repealing This Act Could Save The Cruise Industry From Coronavirus 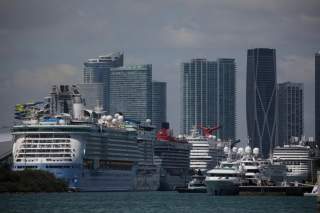 As the coronavirus produces gaping holes in the balance sheets of companies throughout the economy, President Trump has given numerous indications that he considers the cruise industry a prime candidate for a federal bailout. With many of the world’s major cruise lines headquartered in electorally‐​important Florida, that’s not a surprise.

But before appropriating a single dollar of taxpayer money to these cruise lines, Congress and the White House should opt for another form of relief: repeal of the Passenger Vessel Services Act (PVSA). Passed in 1886, the law mandates that vessels transporting passengers within the United States be U.S.-flagged, U.S.-crewed, U.S.-owned, and U.S.-built. Its provisions largely mirror those of the better‐​known Jones Act but apply to people instead of cargo.

Like the Jones Act, the PVSA has been hurting the country almost since its inception. Indeed, after Hawaii was annexed by the United States, and thus became subject to cabotage laws such as the PVSA, representatives from the territory complained that transportation to the U.S. mainland became more difficult than when Hawaii was still an independent kingdom. The advent of commercial air travel, which is not subject to a U.S.-build requirement for domestic service, has thankfully eliminated this hassle.

Fortunately for the cruise industry, the PVSA’s restrictions can be avoided if voyages departing from the United States feature at least one stop in a foreign port. This explains why cruises to Alaska departing from Seattle typically include Victoria, Canada on their itinerary or why cruises from the West Coast to Hawaii often have passengers disembark for a few hours in Ensenada, Mexico.

These unnecessary ports of call result in wasted time and resources. That translates into higher costs and reduced competitiveness for the cruise industry. But it’s also bad for U.S. tourism. Visits to Ensenada or Victoria is time not spent enjoying the sights and attractions of Alaska or Hawaii.

The PVSA, meanwhile, has done nothing to foster a U.S.-flagged cruise industry. Indeed, such ships are almost non‐​existent. Of all the world’s oceangoing cruise ships only a single one, Norwegian Cruise Lines’ Pride of America, complies with the PVSA’s strictures. But even this lone vessel comes with a rather large asterisk:

In 2001, powerful Southern senators arranged for U.S. taxpayers to subsidize a shipyard in Mississippi so it could build a cruise vessel. It tried, and it failed. Within a year, a bungled, half‐​completed hull was declared “unfloatable” and was towed across the Atlantic to be completed in Germany for Norwegian Cruise Lines. But to avoid embarrassment to the U.S. government, the ship is still billed as “Made in America” and is free from the knotted mooring of the Passenger Vessel Services Act.

The case for repealing the PVSA, or at least exempting large cruise ships from its requirements, is overwhelming. It would provide needed economic relief to both the cruise industry and the U.S. destinations they visit at no cost to taxpayers. Equally important, it would be a powerful signal of Washington’s seriousness of purpose in confronting the current crisis and willingness to slaughter the most sacred of cows, including the country’s protectionist maritime laws, in order to place the economy on a steadier footing. Markets would surely take notice. The time to act is now.