Forget the Bombs or Missiles: Iran's Intelligence Machine Is Quite Powerful 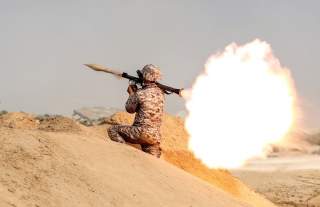 Very rarely do any of us on the outside world know with much clarity about what exactly is going on in the world of Iranian intelligence. The Islamic Revolutionary Guard Corps (IRGC), Iranian military intelligence, and the Iranian Ministry of Intelligence and Security are notorious for their secrecy and efficiency. General Qassem Soleimani, the long-time director of the IRGC’s Quds Force, is one of the most popular public figures in Iran today and has long been a household name (and a major irritant) for U.S. intelligence officers. For those of us who don’t have access to the classified intelligence, we have often see Soleimani as the Iranian military man with the thin, white beard who travels to war zones in Syria, poses for pictures on the frontlines with his fatigues, and organizes and deploys irregular Shia militias to to bail out Tehran’s strategic allies (like Syria’s Bashar al-Assad) when they are dangerously close to being pushed out of power.

A remarkable collaborative project between The Intercept and the New York Times, however, has provided the general public with a little more insight into the Iranian spy-games. Composed of hundreds of reports and cables written within the 2014 and 2015 timeframe and crafted by Iranian intelligence operatives on the ground, the project is a reminder of the proficiency, ruthlessness, cunning, and stone-cold pragmatism of a country frequently described in Washington, D.C. as an emerging 21st century Persian Empire acting solely on emotion and religious fanaticism. While it’s always tricky business to extrapolate from a sample, the reports leaked to the Times and The Intercept point to a nation that is more than willing to push ideology aside in favor of cold-blooded calculation—particularly in next-door Iraq. Three things stand out:

Iranian influence in Iraq is nothing new. Indeed, the influence goes back decades, when Iraqi exiles hunted down and persecuted by Saddam Hussein’s regime in Baghdad ran into the arms of the young Islamic Republic to save their own lives. In the decades before the 2003 U.S. invasion of Iraq, Tehran cultivated extensive relationships with the very Shia political forces that would go on to become prominent players in Iraqi politics after Saddam was swept away. With Saddam’s Baathist regime gone and Washington bumbling the occupation, the Iranians were handed a strategic gift of epic proportions and an opportunity to assert their power in a neighbor previously viewed as a mortal enemy.

Those relationships formed the core of Iran’s informant network in Iraq. And the network only grew over time. The cables paint a scene of high-level Iraqi politicians feeding information to Iran at the same time they were governing the country. Iraqi Prime Minister Adel Abdul-Mahdi was described as possessing “a special relationship” with the Iranian intelligence ministry. Bayan Jabr, Iraq’s Transportation Minister, was labeled “very close” to Iran. Ibrahim al-Jafari, an ex-prime minister and foreign minister, was apparently in the pockets of the Iranians. There was an even an instance when an aid to a top Iraqi defense ministry official traveled from Baghdad to Karbala to meet with an Iranian intelligence officer and pledge full-throated cooperation with Iranian objectives in the country. The Iranian intelligence ministry, it seemed, performed brilliantly in Iraq and did what any intelligence agency is expected to do: form personal relationships; establish leverage over foreign politicians; and funnel raw, on-the-ground intelligence to senior leadership back home.

2. Tehran made an important contribution to the counter-ISIS campaign:

With the Islamic State blitzing across northern Iraq and eastern Syria, Tehran and Washington all of a sudden shared a common national security objective: stop the terrorist group’s advance and demolish its territorial caliphate. While the United States and Iran wouldn’t work directly, the actions of one would tend to assist the other. At the same time, U.S. bombers were dropping munitions on ISIS convoys, Iranian intelligence officers were working their sources in Iraq and breaching the secretive walls of Abu Bakr al-Baghdadi’s organization. Tehran happened to gain access to Baghdadi’s inner-circle quite early. One report from an Iranian intelligence source in December 2014 takes us inside the room of a senior ISIS meeting with Baghdadi in attendance. Tehran also worked to persuade what were thought to be reconcilable Sunni militants away from the Islamic State’s control of the insurgency against Baghdad, using the same tactics the U.S. deployed with the Sunni tribes in Anbar a decade prior.

3. The Iranians are opportunists and pragmatists:

One could reasonably make the assumption that the Quds Force and the Egyptian Muslim Brotherhood have nothing in common and thus any meeting between them would be a stretch. That assumption, however, would be false. One of the more significant disclosures in the leaked intelligence files was a 2014 summit in Istanbul, Turkey between representatives of the two entities. The Brotherhood stressed to their Iranian counterparts during the conversation that while they represented different poles of the Muslim world’s sectarian divide, both "should be...focus on joint grounds for cooperation.” One of those opportunities for cooperation, Brotherhood members insisted, was in Yemen, where Saudi Arabia was only months away from launching its most significant military operation in history in response to the Houthi's storming of the Yemeni capital. The Brotherhood pitched the idea of forging a common position against Riyadh to the Iranian officials in attendance.

The idea went nowhere. The meeting broke up without result. But the mere fact that the summit occurred is a prime illustration of how far Iran was willing to go to enhance its position in the region and bloody its rivals.  Iran's political and military leadership may be dismissed in the West as a collection of raving, religious zealots. But in practice, the Islamic Republic is constantly searching for a void and seeking to capitalize on their adversaries’ mistakes. Sitting down with perhaps the largest Sunni Islamist organization in the world is the very definition of realism.