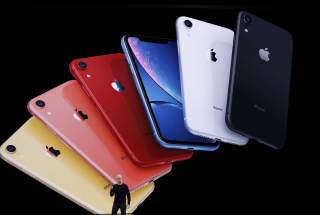 China's Huawei has become a touchstone for US-China technological competition. Countries that want to jump on the 5G bandwagon as quickly as possible with no concern for safety or performance are keen to lock in Huawei's lowball prices. Those that are a little more patient are heeding US advice to consider free-world alternatives like Nokia, Erikson, Samsung, and Qualcomm.

Huawei sells the world's cheapest 5G wireless technology. Whether or not it sells the best is up for debate. And given that 5G is still in its infancy, whether or not it will be selling the best technology at the best price at the end of the decade is a complete unknown. Anyone who thinks that Huawei is the only game in town should visit the United States, where 5G is already up and running despite severe restrictions on the use of Huawei equipment.

With the US and Australia off the table and Boris Johnson facing extreme pressure to ban Huawei from Britain's 5G network, the company has set its sites on continental Europe. Poland has promised to keep its 5G networks secure, but Germany seems ready to go with Huawei -- if China will promise not to use Huawei's equipment for spying on its hosts. Germany's outgoing chancellor Angela Merkel, who grew up under Stasi monitoring and Soviet occupation, seems ready to trust the People's Republic of China on this one.

The European Union has spent twenty years and roughly $15 billion (and counting) to develop Galileo, an indigenous alternative to GPS that no one is likely to ever use, simply because it didn't trust the United States never to lock it out of crucial satellite navigation services. Yet major European countries seem content to let Huawei run their 5G infrastructure, relying on a promise of good behavior from a totalitarian communist dictatorship. Go figure. That's Europe.

Letting a state-promoted company that is under Communist Party control and ultimately answers to the Chinese state run your 5G network is a risky proposition. But you can always unplug a hardware device, and if a country later decides to backtrack from its Huawei commitments, it can transition to other providers over time. Phones and other devices will operate on a 5G signal coming from any 5G transponder, so although replacing Huawei might turn out to be expensive, but it wouldn't necessarily be disruptive.

In addition to WeChat, apps like Alibaba's Tmall ("China's Amazon"), DiDi ("China's Uber"), TikTok (video sharing), and Alipay (electronic payments) are all forms of online netware, a loose category of social technologies that make money by leveraging the size of their networks. Netware is even stickier than hardware or software, because once all your contacts are on the same network, it's very difficult for you to hop off.

Even China's old-fashioned credit card payments system, UnionPay (China's equivalent of Visa and Mastercard), is getting in on the action. It has successfully leveraged international merchants' hunger to sell to Chinese tourists to expand its footprint abroad. Now it is gunning for domestic business in the countries where it operates outside China. Its close cooperation with Alibaba mean that UnionPay may soon be offering payments services (though probably not credit cards) to consumers all over the world.

As Chinese netware apps gain traction beyond Chinese diaspora communities, they will start to pose real risks to Western societies. They may already pose risks in vulnerable countries in sub-Saharan Africa, where state capacity to regulate online services is limited. Right now, the risks are mainly concentrated on relatively minor infractions like the mismanagement and improper use of consumer data (though even this could land you in big trouble if you are a human rights activist, or you do business in China). But if Chinese netware apps gain a firmer foothold in Western markets, the risks will multiply.

Not protectionism, but security

China itself provides the best model for understanding the risks posed by foreign netware and how to counter them. Throughout the 2000s and 2010s, China dragged its feet on letting MasterCard and Visa offer local currency services and only recently allowed American Express to enter the market via a joint venture with a Chinese partner. As a result, few merchants in China accept Western credit cards -- and if Western payments systems are ever shut down (for example, by future US sanctions), domestic payments will not be disrupted.

Western countries should be thinking in similar terms. Do they really want Chinese companies to be deeply embedded in their payments infrastructures? Do they want their retailers to become dependent on selling through Chinese online marketplaces? Do they want their transportation systems to be dominated by a Chinese ride-hailing app? Competition is always welcome when it comes to selling things, or even services. But sticky networks are another matter.

Huawei's prices are too good to be true, because they come with subsidies from (and control by) the Chinese state. Huawei should be banned from providing critical infrastructure for 5G networks throughout the free world. Chinese netware companies like Alibaba, Tencent, TikTok, DiDi, and UnionPay should face high regulartory hurdles, too. At a minimum, they should be required to operate via joint ventures with reliable local partners, just as Western companies are required to do in China. At a maximum, they should simply be banned.