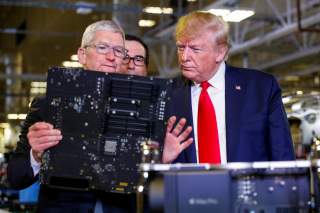 We’ve heard a lot of criticism over the last several years, especially from President Trump and many of his economic advisers and supporters, about US firms outsourcing factory jobs overseas, along with accusations that countries like Mexico, China, and Japan are “stealing US jobs” (see more than 35,000 Google search results for “Trump” + “stealing jobs”). Further, Trump warned after he was elected that his administration would punish US companies seeking to move operations and jobs overseas with “consequences.”

What we don’t hear very much about from Team Trump are the jobs that are “insourced” into every US state by foreign companies, even though those insourced jobs totaled more than 7.4 million Americans and represented 5.9% of all private sector US jobs in 2017 based on new preliminary data released this week by the Bureau of Economic Analysis on “Activities of U.S. Affiliates of Foreign Multinational Enterprises in 2017.” The map above (thanks to AEI’s Allison Torban for assistance, click to enlarge) shows the thousands (and in half of the US states hundreds of thousands) of insourced jobs in each US state in 2017.

Here are some key statistics on business activities in the U.S. that highlight the significant economic benefits to the American economy from the 7,281 foreign-based firms that outsourced jobs and production to the U.S. (data tables here) in 2017:

In other words, the insourcing of production and jobs to the US has a significant and positive impact on our economy, and yet this huge economic stimulus gets almost no attention. All we ever hear about from Team Trump is the jobs that are allegedly being “stolen” from us by China, Japan, Europe, and Mexico.

Bottom Line: In today’s highly globalized economy, multinational firms operate in a world marketplace that increasingly makes national borders meaningless and irrelevant, as firms capitalize on hyper-efficient global supply chains that add enormous value, and ultimately result in lower costs and higher quality for the goods that consumers buy here and around the world. In the recent Trump-era discussions on US manufacturing, the outsourcing of production and jobs overseas, and the supposed “theft” of our jobs by Mexico, China, and Japan, we lose sight of another big part of the global economy: the insourcing of millions of jobs into America by the 7,000+ US-based affiliates of foreign multinational companies that operate here and employ millions of our workers.

Q: How could it possibly make sense for Trump to accuse Mexico, China and Japan of “stealing” our jobs, unless he also admits that the US is apparently then also “stealing” jobs from other countries, more than seven million in 2017? A more enlightened and up-to-date view of international trade would recognize the economic reality that modern businesses today operate in an increasingly globalized marketplace for their inputs, parts, materials, supplies along complex, cross-border supply and value chains that include multiple dozens of countries. In addition, those global companies serve retail markets in hundreds of countries around the globe.

Just like it makes economic and business sense for thousands of foreign companies to outsource jobs and production from their countries to every US state (perhaps because the US is one of their major retail markets), it also makes economic and business sense for thousands of US companies to outsource jobs and production from the US to foreign countries, perhaps also because overseas markets now represent more than 50% of retail sales for many US-based companies like Apple (63% of 2017 sales were in foreign markets, see data here), Procter and Gamble (58% sales were overseas), GE (62% foreign sales) and Pfizer (51% overseas sales). Hopefully, Team Trump will eventually move beyond a simplistic, nationalistic (“America First”), and outdated view of the global economy based on a fixed number of jobs where countries have to fight to “steal” jobs from each other in a zero-sum, win-lose world, to a more advanced and sensible view of a dynamic world of inter-connected, cross-border transactions where production and employment decisions are grounded in the reality of economics, and not politics.

This by Mark J. Perry first appeared in 2019 on the AEI Ideas blog here.