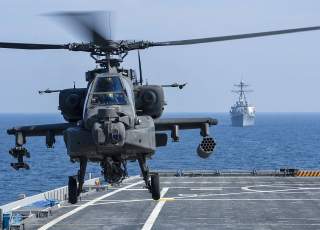 Except it’s actually a self-flying aircraft.

A new Air Force research project calls for a fixed-wing aircraft or helicopter that can fly itself as it rescues wounded personnel, downed pilots or trapped special operations forces.

The goal is to “develop and demonstrate a low-cost aerial platform capable of transporting two to four military personnel (one in medical litter) with no onboard traditional pilot.” The aircraft should have at least a 100-mile combat radius, have a speed faster than 100 knots, and be able to take off and land at “unprepared locations approximately 50 by 50 feet but no larger than 150 feet for supporting combat search and rescue, personnel recovery, and special operations in the field,” according to the Air Force research solicitation.

The project is being spurred by the expectation that in the future, U.S. forces will be fighting in remote environments in the Middle East, Africa and Asia. “These diverse environments will require operations from new isolated locations, at greater distances, requiring low cost solutions for increasing our options for providing transport of small teams of personnel into and out of harm's way without increasing the number of personnel at risk (the aircrew) needed to move these teams,” the Air Force noted.

As a solution, the Air Force points to recent advances in short take-off and landing aircraft and helicopters. Interestingly, the Air Force also suggests that solutions can be derived from two emerging trends in civilian transportation: personal air vehicles (PAV) that are single-seat aircraft for on-demand travel, and urban air mobility, in which Jetsons-like robot taxis fly passengers around congested cities. However, these civilian designs have been limited by the need to have all-electric propulsion, or to meet speed and weight limitations.

The military designs will practically fly themselves. They will be “highly autonomous and flown either remotely through secure data link similar to unmanned aircraft systems/remotely piloted aircraft in use by Air Force and Department of Defense, or through minimal control inputs by the person onboard and not requiring significant training.”

In fact, the aircraft wouldn’t fly to where it’s needed. Instead, it would be air-dropped like cargo, which means it needs to be portable enough to be carried by a C-130 transport of H-47 helicopter (fitting inside a CV-22 Osprey is desired but not mandatory).

Ideally, the aircraft should be capable of carrying 1,400 pounds of personnel and equipment. The platform should be capable of operating in all environments, including desert, jungle, mountains and even flying from land to ships at sea (though actually landing in the water is desired but not mandatory).

Given that the aircraft may have to recover personnel in hazardous situations, it is not surprising that the Air Force wants a stealthy machine. “The platform’s signatures should be minimalized to reduce detection where able with focus on lowest acoustic audible signature when taking off and landing with a landing zone that is not pre-surveyed and measuring approximately 50 by 50 feet but no larger than 150 feet,” the Air Force said. “Unlike the civil PAV concepts to be quiet throughout flight and requiring all electric designs, a hybrid propulsion system with increased acoustic signatures while enroute is acceptable to gain speed and range desired for the military mission.”

And given that the aircraft is meant for passengers who may need to leave in a hurry as bullets fly around them, it is also not surprising that the aircraft needs to be prepped for flight within 30 minutes, without the need for special launch or recovery equipment.