The Forgotten Members of the AR Family 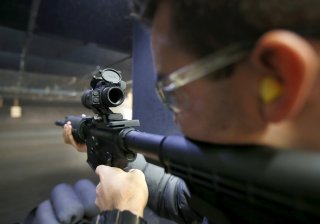 Among the many weapons to come out of the ArmaLite Company during the Cold War, the AR-15 was the most famous. The iconic model was famously adopted by the U.S. military as the M16. The company produced a full line of firearms—many of which may have been ahead of their time.

Among those was the AR-3, a firearm designed by the late Eugene Stoner. It was essentially the great-grandfather of the AR-15 and other firearms to come. Its profile was similar to the M1 Garand and other World War II “self-loading” rifles of the era, but it utilized a forward-locking bolt with multiple lugs. However, the select-fire battle rifle followed ArmaLite’s design principles to be largely constructed from lightweight materials. That included a receiver made of aluminum and a stock built of fiberglass.

The U.S. military reportedly didn’t see much potential with the AR-3. As a result, Stoner turned to more traditional designs including the AR-5, a lightweight bolt-action takedown rifle chambered for the .22 Hornet cartridge that was used as a survival rifle by the United States Air Force. Following that success, Stoner went to work on a new rifle for the U.S. military and the result was the revolutionary ArmaLite AR-10.

It was a select-fire infantry rifle chambered for the 7.62x51-millimeter NATO round. Stoner was submitted for rifle evaluation trials at the U.S. Army’s Aderdeen Providing Grounds in 1956 but was it was rejected in favor of the more conventional T44, a weapon being developed at the Springfield Arsenal. That weapon would be adopted as the M14.

While not selected by the military, ArmaLite pressed forward and marketed AR-10 on a small scale. The limited production was nearly all hand-built and today among collectors those rifles are known as the “Hollywood model AR-10s,” as they were built at the company’s Hollywood headquarters.

Even after the AR-15 was adopted by the military, Stoner began to work on another weapon, the AR-16—not in any way to be confused with the M-16. It was actually marketed towards emerging nations that had a limited industrial base. It was chambered in the 7.62x51-millimeter cartridge, and to facilitate the ease of production, the design of the rifle was kept relatively simple, which included a few machine parts and a rotating bolt system. It also fed from a 20-round steel box magazine rather than the AR-10′s aluminum ‘waffle magazines.’

After Stoner departed ArmaLite, George Sullivan took the lead on a new firearm—the AR-18. It was developed as a low-budget AR-15, and utilized stamped components.

There were also a number of similarities as well as differences with the AR-15 and the AR-18/AR-180. Among those was that the AR-18 included an operation handle attached to the bolt carrier that traveled with the carrier during operation. Additionally, the stock and fore-end of the AR-18/180 was a bit lighter than the AR-15/M16; while the buttstock was also hinged at the rear of the receiver assembly in an effort to ease portability in confined spaces. The barrel length of the AR-18 was also two inches short at eighteen inches, which resulted in a slightly more compact rifle compared to the AR-15/M-16.

Some five thousand were made, but the price remained too high. As a result, ArmaLite teamed up with the Japanese firm Howa, which produced the AR-18 under contract. But then the Japanese government outlawed them from building firearms for export for military contracts, and production returned to the United States.

In the years that have followed, the AR-180 for the civilian market has been introduced a few times—yet it has never been a huge hit. But with so many AR-15s on the market, that really shouldn’t come as a surprise.