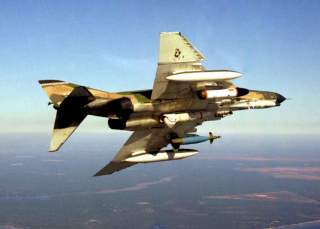 With 100 percent of my available concentration, I focus on keeping the thin crosshairs in the laser scope superimposed over the westernmost gun pit. My pilot is flying smoothly, but the task of tracking the target is not easy. The aircraft is traveling at 500 miles per hour, the hot, sunny day in Laos is producing thermals and bumps, and I am nervous.

With no warning, the gun pit displayed in the scope under the cross hairs erupts in a massive explosion of flame, smoke, and red dirt tossed high into the air. A 2,000-pound bomb impacted exactly in the center of the gun pit, vaporizing the gun, the stored ammunition, and the unlucky human gunners. It couldn’t have happened to nicer guys. As the smoke and dust drifts, clearing away, all that remains is a much larger, darker hole dug by the bomb. A 2,000-pound bomb has enough explosive force in it to destroy the factory the gun was built in; its effect on the contents of a forty-foot pit must have been devastating. The circular sand-bagged revetment, intended to protect against a near miss, has instead focused the hell from above.

I am amazed. This thing actually works. However, I am the only member of Satan Flight who can see exactly what has happened. I whoop it up a little and tell my pilot,

“Shit hot. A direct hit. Right down the tube.”

The Nail goes berserk on the radio.

“Satan, that was a shack (pilot slang for a direct hit), you took out one gun, there’s nothing left. That was terrific, one bomb, one gun destroyed. Can you guys do that again?”

It appears Nail hasn’t been briefed at all on Project Paveway; he doesn’t know what, or who, he is dealing with here. Considering his likelihood of being shot down, captured, tortured, and interrogated, that is probably a good thing for the security of the program.

“Roger that, Nail. We’ll try. Satan Two, go for the eastern most gun this time.”

In a minute or so, Satan Two calls, “Rolling in again. FAC in sight.”

I aim the crosshairs on the eastern pit and turn on the laser. I am rewarded with a repeat performance, a huge explosion, a smoking crater, and another gun blasted into tiny bits along with its crew.

The Nail is beside himself.

“Satan, that is the best bombing I have ever seen. How are you guys doing that? Can you keep it up?”

Satan Lead laconically answers in the affirmative. The casual tone of his voice implies this is just another day at the office for us Phantom/Paveway jocks. Reversing roles, we climb up to our bombing altitude and Satan Two descends to illumination altitude, still circling the doomed target. We make two dive bomb runs, drop two Paveways, and destroy two more guns with direct hits. It is Satan Two’s turn to have sonar’ fun. Since the beginning of the war, hell, since the dawn of aviation, antiaircraft gunners have shot at us and our aerial predecessors with impunity. They have always known they had the upper hand. We couldn’t touch them in what has been to date an uneven fight. Now, we’re the predators. We can pick them off at will and with relative safety. That is a good feeling, knowing the hunter has become the hunted. Let the dispenser of fear now taste panic’s drying flavor in their mouths for a change.

“Nail. Satan is Winchester (meaning no more bombs] and we’re RTB (Returning To Base).”

The Nail is speechless. For days, maybe weeks, he has been skirting the now-destroyed guns, waiting for them to shoot him or someone else down. The gunners have been shooting gleefully at all and sundry and having a grand old time trying to kill Americans. Now four guns are utterly destroyed, four gun crews have been liquidated, and the rest undoubtedly have fled their posts for the surrounding jungle. Nothing like seeing four sets of your buddies blown to smithereens to undermine your resolve to produce American widows and to win the war for Uncle Ho.

Nail comes on the radio with a good-bye as we leave the area and head back to Thailand.

“‘Satan, that was the most unbelievable bombing I have ever seen. Come back and work with me anytime. You guys are shit hot.”

The Nail knows the surviving gun crews will quickly spread the word that shooting at an OV-10 is a one-way ticket to oblivion. The FAC’s job just got safer.