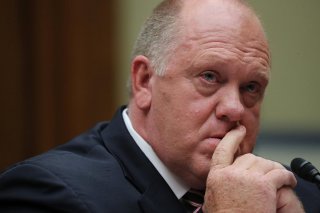 Former Immigration and Customs Enforcement (ICE) chief Tom Homan is out with a book, which he said lays out the immigration debate before the American people and “sets the record straight” about his own positions on border security.

Homan just released “Defend the Border and Save Lives: Solving Our Most Important Humanitarian and Security Crisis,” which dives into the always-controversial topic of immigration. Homan, who spent a career in law enforcement and, most recently, as the acting director of ICE, spoke with the Daily Caller News Foundation about what’s inside the book and what drove him to write it.

“I’m a cop. I never thought I’d write a book, but I wrote it pretty much out of frustration,” Homan told the DCNF.

The former ICE chief said that the complex issues taking place at the border can’t be explained in a short segment on television, nor can they be explained on the Hill, where he said discussion on immigration enforcement quickly turns into a shouting match with lawmakers.

The main point that Homan hopes readers take away from reading his book: that illegal immigration is not a victimless crime.

“I wanted to identify to the American people that illegal immigration is not a victimless crime. Here’s why you should care. Here’s what’s wrong, and here’s how we fix it,” the longtime immigration officer said. “It’s not hard to fix.”

Homan noted that, even for illegal aliens who enter the country and do not commit any violent crimes, many of them have to pay a cartel or smuggling organization to transport them to the U.S. border — essentially bankrolling violent organizations.

He added that 31% of women are raped on their journey to the U.S.-Mexico border, and that Border Patrol agents rescued more than 4,000 individuals in 2019 who would have otherwise perished in the desert or drowned in the Rio Grande. Allowing illegal immigration to continue will only fuel such dangerous conditions.

Homan certainly speaks from a perch of deep experience on law enforcement.

He served as a police officer in New York before joining what was then called the Immigration and Naturalization Service — the agency was changed in the wake of the 9/11 terrorist attacks. He also served as a Border Patrol agent, and was later appointed by former President Barack Obama to be executive associate director of Immigration and Customs Enforcement in 2013.

He then served as the acting director of ICE from January 2017 to June 2018, the first ICE chief under the Trump administration, before retiring from government.

The former ICE director, who works as a contributor for Fox News and frequents congressional hearings, said not everyone is going to enjoy his book.

Homan added: “I explain what [Border Patrol and ICE does], and most importantly what they don’t do. They never arrested anybody in church, they never arrested in the hospital. But the left wants to think that. It’s my intent to put the false narrative to bed.”

Going beyond the immigration debate in Washington, D.C., Homan noted the personal excerpts in the book and how it details what he’s witnessed in his more than 30 years in law enforcement.

“A lot of people say I’m a racist. I’m here to set the record straight,” he said. “My book talks about who Tom Homan is and how Tom Homan became the guy they see out there.”