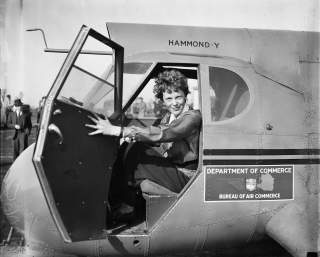 A new study conducted by Richard L. Jantz, professor at the University of Tennessee, has concluded that bones found on the island of Nikumaroro three years after her disappearance are those of the missing pilot.

According The Telegraph, bones found on a remote Pacific island are most likely those of the lost aviator Amelia Earhart, a new forensic study has concluded.

Since then several theories and conspiracies have emerged as to her fate, including that she was captured and held by the Japanese.

However a new study conducted by Richard L. Jantz, professor at the University of Tennessee, has concluded that bones found on the island of Nikumaroro three years after her disappearance are those of the missing pilot.

The bones were initially ruled out as those of Earhart after a first examination concluded they were male.

Professor Jantz has argued that forensic techniques were not fully developed at the time and that the bone measurements closely match Earhart’s records.

“The only documented person to whom they may belong is Amelia Earhart,” he pointed out.

Amelia Earhart (born on Jul. 24, 1897) was an American aviation pioneer and author. She set many records, wrote best-selling books about her flying experiences and was instrumental in the formation of The Ninety-Nines, an organization for female pilots. In 1935, Earhart became a visiting faculty member at Purdue University as an advisor to aeronautical engineering and a career counselor to women students. She was also a member of the National Woman’s Party and an early supporter of the Equal Rights Amendment.

During an attempt to make a circumnavigational flight of the globe in 1937 in a Purdue-funded Lockheed Model 10-E Electra, Earhart and navigator Fred Noonan disappeared over the central Pacific Ocean near Howland Island.

For weeks the area was searched by the U.S. Navy, but the plane was never found and Earhart was legally declared dead in 1939.

In 1940 an exploration party sent by the Phoenix Island Settlement Scheme, which aimed to colonise remote islands, stumbled across bones on Nikumaroro.

As explained by The Telegraph the officer in charge then ordered a wider search of the area which turned up more bones, part of a woman’s shoe and personal artifacts including a sextant box and a bottle of the herbal liqueur, Benedictine.

The remains were examined by the principal of the Central Medical School, Fiji of the Dr. D. W. Hoodless, who concluded they belonged to a “stocky male” around 5ft 5ins.

As bones have since been lost, Professor Jantz used the bone measurements taken by Hoodless and compared them with what is known of Earhart’s body type.

Jantz was able to piece together Earhart’s bone measurements by using her photos along with her driver’s and pilot’s licence records.

Summing up the process, he said: “If the skeleton were available, it would presumably be a relatively straightforward task to make a positive identification, or a definitive exclusion.

“Unfortunately, all we have are the meager data in Hoodless’s report and a premortem record gleaned from photographs and clothing.

“From the information available, we can at least provide an assessment of how well the bones fit what we can reconstruct of Amelia Earhart.”

Professor Jantz claimed that in 1940 “osteology was not yet a well-developed discipline” leading Hoodless to incorrectly assign the gender of the remains.

His own studies showed that the bones were closer to the measurements of Earhart than 99 per cent of a very large sample size.

Jantz concluded: “Until definitive evidence is presented that the remains are not those of Amelia Earhart, the most convincing argument is that they are hers.”

Noteworthy there has been considerable speculation on what happened to Earhart and Noonan after they disappeared. Most historians hold to the simple “crash and sink” theory, but a number of other possibilities have been proposed, including several conspiracy theories.

Some have suggested that Earhart and Noonan survived and landed elsewhere, but were either never found or killed, making en-route locations like Tarawa unlikely. Proposals have included the uninhabited Gardner Island (400 miles (640 km) from the vicinity of Howland), the Japanese-controlled Marshall Islands (870 miles (1,400 km) at the closest point of Mili Atoll), and the Japanese-controlled Northern Mariana Islands (2,700 miles (4,300 km) from Howland).