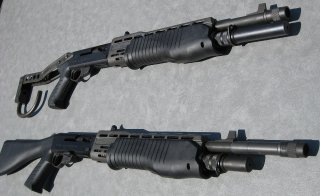 While the Federal Assault Weapons Ban (AWB)—also known as the Public Safety and Recreational Firearms Use Protection Act—which lasted from 1994 to 2004 has largely been remembered for prohibiting the manufacture of certain semiautomatic weapons such as the AR-15 and AK-47, it also banned a few shotguns as well.

Among those was the Italian-made Franchi SPAS-12, a 12 gauge shotgun that was designed by PieroTorsani, an engineer at Franchi, and produced from 1979 until 2000. It was most notable in that it was a dual-mode shotgun, adjustable for use as either a semiautomatic or pump-action. In its semiautomatic mode, it could fire four rounds per second. As it was initially developed for military and police use including as a combat shotgun and for anti-riot and crowd control, it was originally designated the Special Purpose Automatic Shotgun.

However, to sell it commercially in the United States, Franchi renamed it the Sporting Purpose Automatic Shotgun while the 8+1 magazine capacity was reduced and it was fitted with a fixed stock instead of the folding stock that was used in the police/military versions.

Despite those efforts and due to its unique characteristics, notably the high rate of fire, the SPAS-12 was banned for commercial sale after 1994, and it was discontinued before the AWB expired in 2004. Even before the ban, the shotgun failed to break into the civilian sporting gun market, in part because the system to switch between the semiautomatic and pump proved complicated, while in semiautomatic mode the shotgun was largely unwieldy.

While it had an iconic—almost futuristic—look thanks to its large heat shield that allowed for sustained firing, the shotgun was also considered too complex for big game hunting or competition use. Even its appearance in the 1984 sci-fi classic film The Terminator—where it is used by the title character in several sequences including the police department shootout—failed to attract enough interest with buyers before it was eventually banned.

It may have been immediately recognizable but movie buffs don't always buy guns and serious shooters don't base their purchases on what a killer robot from the future used in his termination efforts. However, it has remained a staple in action films over the years.

During its production, a few variations of the SPAS-12 were produced and these included models with detachable wooden and even synthetic stocks, while the sporting models were available with both 18- and 24-inch barrel systems. The police/military version with the folding stock would also be fitted with an optional folding underarm “loop” that was meant to improve single-handed firing but that due to the weight as well as the recoil this was considered impractical and only a Terminator could even think of firing it one-handed with the stock folded!

The SPAS-12 was not widely adopted by police or military, but among its users were the Austria EKO Cobra counter-terrorist forces, Brazil’s GATE Special Forces, the French GIGN, Indonesia's KomandoPasukanKatak (Kopaska) Special Forces, the Malaysian Special Operations Force and some U.S. police SWAT teams.

While it may have been favored by movie villains and heroes in the real world it has largely been replaced by the SPAS-15. However, like some of the films in which it appears, this is a gun that has also become something of a cult classic.