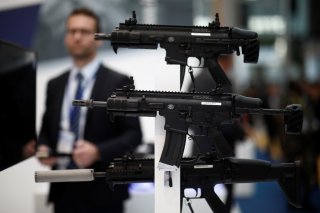 Throughout much of the nineteenth and twentieth centuries, France and Belgium retained close ties due to cultural similarities. After the First World War, the two nations signed the Franco-Belgian Military Accord of 1920, a collective defense pact. Though it was canceled in 1936 when Brussels sought to return to a policy of neutrality, both nations became founding members of NATO after the Second World War.

It will be employed by units of the French Commandement des opérations spéciales (Special Operations Command), which will be the first military force to adopt the latest machine gun developed by iconic Belgian firearms manufacturer FN Herstal. Units of the French Special Forces are expected to begin receiving the weapon by early May of this year.

The EVOLYS was unveiled in the two most widely used NATO calibers—5.56x45mm and 7.62x51mm NATO—last May, while variants in additional calibers, including 6.5 Creedmoor and .260 Remington, are currently in development. The weapon combines the belt-fed machine gun firepower with assault rifle ergonomics and, depending on variation, weighs either 5.5 or 6.2 kilograms—far lighter than current light machine guns. It features a patented lateral feed mechanism that allows for its compact size.

Various optical sights can be mounted in-line, while the iron sights can also remain present. It offers ambidextrous controls, while all actions, including belt engagement, can be done with just one hand. The select-fire machine gun also provides for semi-automatic fire for point target engagement and fully automatic suppressive fire.

The EVOLYS is notable in that it was developed to be capable of having a suppressor permanently fitted without  impacting the weapon's performance. The light machine gun was also produced using new techniques in 3D printing as well as  advanced polymers. Both factors reduce the weapon’s weight, which  is reported to be upwards of thirty percent lighter than the FN Minimi.

It has a cyclical rate of 750 rounds per minute, while the gas operated short-stroke pistol machine gun, which fires from an open bolt, has an effective range of 800 meters with the 5.56mm round or 1,000 meters with the 7.62mm cartridge.

French Special Forces operators may be the first to employ the weapon, but others are interested—the British Army has already ordered samples for testing purposes. Defense analysts have suggested the British military could replace the FN Herstal Minimi with the EVOLYS, which may convince other NATO partners that this is the light machine of the future.