Friends Or Enemies? Russia And Turkey Are Butting Heads Over Syria 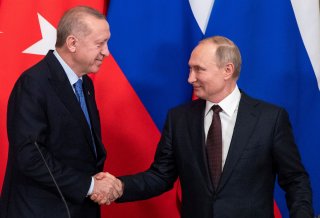 Key point: The relationship between Ankara and Moscow is complex

The death of 33 Turkish soldiers in an airstrike in Syria’s northwestern Idlib province on 27 February brought the number of Turkish fatalities in Syria to around 50 for the month. It appears likely that the airstrike was carried out by Russian jets, and the event confirms that the 2019 Sochi ceasefire agreement has failed and that Moscow and Ankara are increasingly on a collision course in Syria.

But the relationship between Ankara and Moscow is complex. The two countries are arguably as much bound by the common world views of Russian President Vladimir Putin and Turkish President Recep Tayyip Erdogan as they are divided by their strategic competition in the Middle East. Consequently, it’s difficult to predict how the crisis in Idlib will unfold.

In many respects, Erdogan and Putin make natural allies. Each is seeking to forge a global role for his country by taking advantage of a perceived decline in Washington’s global power and authority. They are both autocratic in their political leanings and have carefully cultivated cults around their political personas that reflect their credentials as strongmen.

Erdogan and Putin are pragmatic and political realists who can recognise and exploit opportunities to advance their objectives across the Middle East. They also share a broad antipathy towards the West. The most symbolic element of Putin and Erdogan’s relationship is Ankara’s decision to purchase Russian-made S-400 air defence systems, which effectively sacrificed its relationship with Washington and its NATO allies in favour of closer alignment with Moscow.

But the Russian–Turkish confrontation in Syria been assessed as confirming the limits of cooperation between Moscow and Ankara, with their respective geopolitical aspirations viewed as incompatible and the reason why the alliance is destined for failure.

Ankara still seeks the overthrow of the regime of President Bashar al-Assad in Damascus and has committed heavily to supporting the last rebel strongholds in northern Syria as part of a strategy that also aims to secure Turkey’s border against Syrian refugees and combat Kurdish militia groups in the region. While estimates of the number of troops that Turkey has deployed to northern Syria vary, a recent report indicates that it has committed around 15,000 soldiers. And the cost of Ankara’s intervention is increasing.

In contrast, Moscow has deployed significant military resources to Syria over the course of the civil war to prop up the Assad regime. More than 63,000 Russian troops rotated through Syria between 2015 and 2018, and Moscow has confirmed that 116 Russian soldiers died during the conflict. Another 100 Russian Wagner Group private military contractors were killed in Syria.

The problem for both Erdogan and Putin is that they have both invested heavily in pursuing contrary outcomes in the Syrian civil war and neither can afford to be seen to blink. Erdogan has committed much to demonstrate that Ankara can enforce its will across the Middle East, and a failure in Idlib would be a blow to his ego and personal prestige, at home and abroad. Likewise, Putin has made Syria central to his plan for Moscow to supplant Washington as the key mediator in Middle East conflicts. A failure to help Assad reassert Damascus’s control over Idlib would seriously undermine Russia’s credibility in the region.

Prior to 27 February, Erdogan had appeared willing to de-escalate tensions in Idlib by accepting a proposal from Germany and France for talks with Russia on Idlib in Istanbul on 5 March. But he seems to have taken a firmer line following last week’s events. He reportedly told Putin during a phone call that Russia should stay out of Ankara’s fight with the Assad regime. Ankara also launched Operation Spring Shield targeting Syrian government forces operating in Idlib.

But Erdogan knows that Ankara is powerless to counter Russian air supremacy in the region. The S-400 air defence system isn’t scheduled to become operational until April. Erdogan’s desperation was apparent in his early February request to Washington for two batteries of Patriot air defence missile systems. Erdogan’s overture to Washington is important—it must have been galling for him personally, given that Ankara’s rejection of the Patriot system in favour of Russia’s S-400 caused the current rupture in its relationship with Washington, but it also showed the lengths he may be prepared to go to regain the upper hand in Idlib.

Ankara is also slowly learning that it is increasingly friendless as a result of its military inventions in Syria and Libya. Saudi Arabia, the UAE, Bahrain and Egypt have all condemned Turkey’s military adventurism in Syria as a violation of the country’s sovereignty, despite several of these states also materially supporting rebel Syrian groups during the civil war. And following its threats to open Turkey’s European borders to Syrian refugees, Ankara may also learn that there are few sympathetic voices in Europe.

Putin will understand this going into discussions with Erdogan on 5 March. The significance of Ankara’s recent overtures to Washington will not be lost on Moscow. Putin also clearly understands that Moscow retains the balance of power in its relationship with Ankara, and has more levers that it can deploy should it not get its way in Syria. It is also significant that the original plan brokered by the Germans and the French for a ‘four powers’ conference on Idlib in Istanbul appears to have been replaced by a meeting between Putin and Erdogan in Moscow, with the new location symbolic of the balance of power between the two.

The key to the current crisis will be whether Moscow and Ankara can reconcile the competing strategic priorities that define their relationship and find common ground on the question of Idlib. The risk for Erdogan is that Putin has already proven adept at using ‘coercive diplomacy’ to bend Erdogan to his will and that he will continue to do so by forcing Erdogan to accept a compromise in Idlib that favours Russia. But, given recent events, even a compromise agreement on Idlib is better than no agreement, and it may provide both Erdogan and Putin with an opportunity to weigh up the importance of their objectives in Syria against the value of their broader relationship.

Connor Dilleen has worked for the Department of Foreign Affairs and Trade and the Office of National Assessments. He currently works for Australia’s privacy regulator. This article represents the author’s personal views and does not necessarily reflect the views of the Australian government.

This first appeared earlier this month.