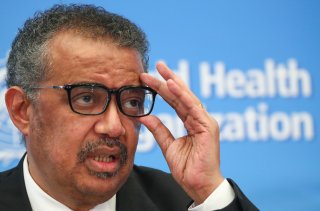 World Health Organization (WHO) Director-General Tedros Adhanom Ghebreyesus came under fire in 2017 over his handling of cholera epidemics in Ethiopia and Sudan. Physicians and health professionals at the time accused him of failing to properly classify outbreaks of the disease in order to avoid embarrassing the two African regimes.

Nearly three years later, Tedros is facing similar allegations over his response to the novel coronavirus pandemic that originated from China. He and the WHO have come under heavy scrutiny for defending the Chinese government’s response to an outbreak in the Wuhan province in November 2019.

A group of American doctors blasted Tedros in September 2017, accusing him of failing to investigate outbreaks of cholera in the African country, which neighbors Ethiopia. Sudanese leaders classified the outbreak as “acute watery diarrhea” rather than cholera, which is caused by a bacteria found in unsanitary drinking water.

The terminology affected whether outside health organizations would marshal resources to fight an outbreak of the deadly bacteria.

“Your silence about what is clearly a massive cholera epidemic in Sudan daily becomes more reprehensible,” the doctors wrote in a Sept. 11, 2017, letter to Tedros.

“The inevitable history that will be written of this epidemic will surely cast you in an unforgiving light,” they also wrote, adding that Tedros was “fully complicit in the terrible suffering and dying that continues to spread.”

Months earlier, Lawrence Gostin, the director of the O’Neill Institute for National and Global Health Law at Georgetown University, had lobbied against Tedros taking over WHO because of his handling of cholera outbreaks in Ethiopia in 2006, 2009 and 2011.

Tedros served as Ethiopa’s health minister from 2005 to 2012, when he took over as the east African nation’s foreign minister.

“Dr. Tedros is a compassionate and highly competent public health official,” Gostin told The New York Times. “But he had a duty to speak truth to power and to honestly identify and report verified cholera outbreaks over an extended period.”

According to The New York Times, WHO officials had privately complained that Ethiopian health officials lied about the outbreaks. The Washington Post reported in August 2016 that the Ethiopian government restricted international aid organizations from calling the outbreak anything other than “acute watery diarrhea,” as well as from publishing the number of people sick from the epidemic.

Tedros insisted to The New York Times that the Ethiopian outbreaks were “acute watery diarrhea,” and that it was difficult to test for cholera. He has long dismissed the cholera allegations as a smear campaign waged by political rivals.

Meanwhile, Henry Thayer, a professor at the University of Texas-San Antonio, and Lianchao Han, the vice president of Citizens Power Initiatives for China, accused Tedros of turning a “blind eye” to China’s culpability in the ongoing coronavirus pandemic.

They wrote in a March 17 op-ed in The Hill that both Xi and Tedros should “be held accountable for recklessly managing this deadly pandemic.”

Tedros, 55, has hailed China’s nearly universal lockdown of the Wuhan province as “a new standard for outbreak response.”

On Jan. 14, the WHO tweeted that there was no evidence at the time of human-to-human transmission of coronavirus. At least 360,000 people across the globe have tested positive for coronavirus, which the CDC now says is mostly spread through person-to-person contact. More than 16,000 have died.

The Sunday Times, a British newspaper, reported that Chinese officials forced scientists to destroy samples of the virus early on in the outbreak. The government also punished doctors who warned about the emerging outbreak.

China’s inaction has reverberated across the globe, according to a study from the University of Southampton.

“If interventions in [China] could have been conducted one week, two weeks, or three weeks earlier, cases could have been reduced by 66 percent, 86 percent and 95 percent respectively – significantly limiting the geographical spread of the disease,” wrote Southampton researcher Shengjie Lai.

While Tedros has praised China, he has not criticized the government there for floating propaganda blaming the United States and other countries for being the actual points of origin for coronavirus.

WHO did not respond to a request for comment.

Peter Hasson contributed to this report.