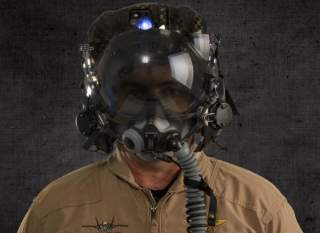 Noteworthy the helmet’s ground-breaking technology equips the pilot with mission-critical information on the helmet’s visor; resolves well-documented fit, comfort, and convenience problems associated with helmets worn by pilots of legacy aircraft; and fuses together the Joint Strike Fighter’s cutting edge communications and sensor suite to form a clear picture of the operating environment — giving F-35 pilots unrivaled situational awareness and a decisive advantage over adversaries.

The helmet is also easily realigned and readjusted based on the individual pilot’s needs, whereas previous legacy F/A-18 helmets are rigid, cumbersome, and require manual upgrades.

Built with its own Display Management Computer Hardware operating system the helmet enables pilots to toggle through different modes of data visualization. It also delivers a more efficient video feed than the F-35’s Gen II helmets — equipping pilots with symbology correlated inside the cockpit as well as outside the aircraft with the use of the Distributed Aperture System (DAS). Using multiple DAS cameras installed peripherally around the aircraft, the F-35 driver can display various modes of imagery such as thermal, night vision, and actual and achieve an unprecedented look-through-aircraft capability. All modes are beneficial to pilots as they deliver a clear 360-degree picture during daylight and lowlight settings. Thermal images portrayed through DAS enable pilots to view heat signatures emitted by various objects. For instance, a pilot can identify a ship running a hot engine against the vast darkness of the cold ocean. Night vision can also assist in magnifying low visibility objects against areas of very little to no light.

“In addition to the aircraft’s flight symbology, I can display tactical data and even live night vision video. The helmet helps me find friendly and enemy aircraft, locate targets on the ground, and can even point out the ship. It is fully integrated into the aircraft systems and enables a seamless transition between tactical display and the outside world,” he added.

Another shortcoming with JHMCS legacy helmets is the graphics on the display visor, which block the pilot’s ability to see through an overly bright image. Engineers worked to refine this imagery on previous iterations of the Gen III helmet and now the latest helmet enables pilots to toggle through several gradients of opacity. Furthermore the pilot is able to devote less time switching through different modes and doesn’t have to physically install Night Vision Goggles before starting a night mission because the Night Vision Device (NVD) is built-in.

Moreover legacy aircraft only displayed targets on screens installed inside the actual cockpit, creating a disadvantage because pilots would have to turn their heads away from their surroundings. Now, F-35 pilots can focus on their targets via the Gen III helmet display visor. This empowers them to keep track of adversaries farther than they could ever turn their heads.

Additionally the clear 360-degree picture of the battlespace delivered by the helmet provides the F-35 pilot with an unparalleled ability to dominate the tactical environment. Likewise, commanders at sea, in the air or on the ground immediately receive information collected by the F-35’s sensors via data link — empowering them with an instantaneous, high-fidelity view of ongoing operations, making the F-35 a formidable force multiplier while enhancing coalition operations.