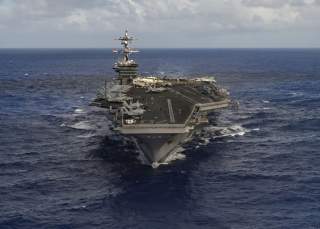 There is a tendency for experts and laypeople to think of military platforms and their performance largely in terms of hull forms, airframes and vehicle shells. However, it is often the case that one or more critical systems or even components can be the key to a warship, fighter or combat vehicle’s success in battle.

Take the amazing P-51 Mustang, the fighter plane that drove the Luftwaffe from the skies over Germany. It has a remarkable design and is a pilot’s dream to fly. But what enabled it to dominate the air domain over Europe was a particular engine.

When the original Allison power plant was replaced by the supercharged Rolls Royce Merlin engine, the Mustang’s full potential was realized. With the new engine, the P-51 operated better at higher altitudes, accelerated more rapidly and burned less fuel, the last point being particularly important for the long bomber escort missions over the continent.

The same is true today. For example, the F-22 is the best air superiority fighter in the world. There are many reasons for this success: its stealth characteristics and coatings, radar, avionics and sensors. But above all, it is the F-22’s engine that gives it an edge.

The Pratt &Whitney F119 engine delivers more thrust with fewer moving parts than any previous fighter engine. Its unique design allows a jet fighter to operate at sustained super cruise speeds for the first time, and the F119's nozzles incorporate thrust vectoring technology that provide unequalled maneuverability. These features translate into combat superiority. A variant of the Pratt &Whitney F119, the F135, is the power plant for the F-35 Joint Strike Fighter.

The same is true for other military platforms and weapons systems. For the Abrams tank, which carries an amazing array of electronic systems, it is the 120mm cannon and the unique gas turbine engine that provide distinct advantages in lethality, speed and maneuverability. The U.S. Air Force’s fleet of specialized intelligence, surveillance and reconnaissance aircraft are built on the old Boeing 707 platform and powered by rebuilt engines. What makes them unique are the remarkable sensor suites they carry. Many current precision aircraft bombs are little different from their “dumb” predecessors except for the small sensors or guidance packages that receive reflected laser light from the target or GPS coordinates from satellites in space.

As the name implies, the character of the U.S. nuclear Navy, which consists of more than 50 attack and strategic ballistic missile submarines as well as all the aircraft carriers, is determined by its unique power plants. Nuclear power allows these vessels to operate in ways that conventionally-powered ships and submarines simply could not. U.S. submarines and aircraft carriers, particularly the current generation Virginia class submarines and the new Ford class aircraft carriers, have a remarkable array of advanced systems that make them the best boats and ships of their kind in the world. But the core of their capabilities, the source of their power, is their nuclear reactors.

There is only one U.S. company that makes naval reactors, BWXT. This company has made every reactor for Ohio, Los Angeles, Seawolf and Virginia class submarines, as well as the entire fleet of Nimitz and Ford class aircraft carriers. Without question, it will provide the nuclear power plants for the Ohio Replacement Program submarines.

BWXT is a national treasure when it comes to the design, fabrication, fueling and decommissioning of nuclear reactors. The skills and knowledge built over more than a half century of reactor-related work for the U.S. Navy also has informed the company’s business in support of commercial nuclear power.

Decades of work in one of the most exacting portions of the advanced technology sector has also provided BWXT with extensive experience and expertise in the management of large, complex national infrastructure sites. BWXT is deeply involved in the management of critical nuclear and national security facilities for both the U.S. Department of Energy and the National Nuclear Security Administration. The company’s extremely high level of competence has resulted in successful competitions for contracts to provide facilities management and maintenance services to non-defense government entities such as NASA.

Every decade or so, the Department of Defense and Congress decide it is time to worry about the state of the defense industrial base. This usually results in a requirement for a study. What those studies always show, and what anyone reading the newspaper knows, is that the U.S. defense industrial base is shrinking. This is true in the shipbuilding sector. There are only five shipyards capable of building Navy submarines and major surface vessels. For the nuclear Navy, only two build nuclear submarines, General Dynamics’ Electric Boat Division and Huntington Ingalls’ Newport News Shipyard. Newport News is the sole facility able to construct nuclear-powered aircraft carriers.

One provider of nuclear reactors is supporting all this activity for the nuclear Navy: BWXT. To date, its performance has been outstanding. Its survival is a matter of national importance. Any strategies for the preservation or expansion of the defense industrial base must place BWXT at the top of its list of national jewels to be protected and supported.

Daniel Gouré, Ph.D., is a Vice President of the Lexington Institute. He served in the Pentagon during the George H.W. Administration and has taught at Johns Hopkins and Georgetown Universities and the National War College. You can follow him on twitter @dgoure and you can follow the Lexington Institute @LexNextDC. This piece was originally featured in June 2017 and is being republished due to reader's interest.