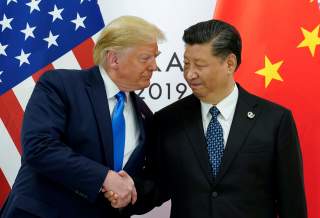 President Trump closed out the G20 summit in Osaka, Japan with a wide-ranging Saturday press conference that was long on self-congratulation and short on details. Except, that is, for one big detail: he will allow American companies to sell technology to Huawei.

Trump also confirmed that additional tariffs will be put on hold while trade negotiations continue, but that doesn't change much (and wasn't much of a surprise). The Huawei announcement is different. It gives the company a new lease on life.

Huawei relies heavily on American technologies—including Google's Android operating system—to make its phones work. Without access to these technologies, Huawei's phones would slowly break down, as software systems update and, one by one, apps stop working. And without access to American technology, Huawei would find it difficult to make phones at all. Who wants to buy a new phone from a company that may soon go out of business?

Depending on how you count, Huawei is now the second or third largest mobile phone company in the world, trailing only Samsung and (sometimes) Apple. It is by far the biggest in China. A Huawei collapse would be catastrophic for China's mobile phone industry. Luckily for China, that outcome seems to have been averted—for now.

Those are the crucial two words: "for now." Trump is like a cat that has Huawei by the tail. Every time he lifts his paw, the mouse might scurry away. But it's never going to get very far.

The same holds for the overall trade relationship between the United States and China as a whole. China may be a very big mouse, but in structural terms, it's just as cornered as Huawei. The United States can impose or suspend tariffs at will, and there's very little China can do to fight back. The Chinese economy depends on the US market for its very survival.

China might have more leverage if, for the last two decades, it had complied with its WTO obligations to open its markets to American companies. If Google, Facebook, and Amazon were the dominant internet companies in China, China would be able to play the cat, too. But the whole point of Trump's "trade war" is to force China to honor its WTO commitments. If it did, there would be no need to pressure China in the first place.

Those who admire China's authoritarian political system believe that China's one trump card in trade talks with the United States is the fact that Donald Trump is vulnerable to domestic opposition, while Xi Jinping does not. That is supposed to put pressure on Trump to seek a quick deal. Authoritarian leaders like Xi can wait a lifetime—or so the story goes.

The reality is very different. It is certainly true that an American president must juggle the demands of multiple constituencies: farmers who want to sell soybeans, companies that want to license technology, and ordinary voters who want to see results. With an election coming up in less than a year and a half, Trump must please his constituents just to keep his job.

But Chinese leaders face political pressure, too. It may not be as open or as visible, and it certainly isn't discussed in the official Communist Party media, but it is real, and it can be decisive. You can bet that Huawei's chief executive Ren Zhengfei has been on the phone with Xi Jinping, pushing for a deal. And not just him.

Foreign manufacturers are abandoning China in droves, whether because of existing tariffs or the fear of future ones, and that must have local politicians worried about hitting their targets. Chinese companies are also shifting production to Vietnam and Southeast Asia. All this is happening while the Chinese economy appears to be in recession (despite official statistics showing a robust 6.4% annual growth) and in desperate need of a stimulus. A lot of Chinese billionaires stand to lose a lot of money if the trade war goes on much longer, and although they may not be voters, they are key supporters of the Communist Party of China.

What's more, the Trump tariffs have hardly affected American voters. If they have driven up retail prices at all, it has been too little to show up in official inflation rates. Farmers might be upset to lose markets in China, but their real problem is a global soybean glut. Regardless, the Trump administration has already announced an aid package for farmers to help them through the crisis.

So, if Trump has less than seventeen months to make a deal, that's only because it would be politically embarrassing for him to go to the polls without one. Xi's timeline is likely to be much tighter. Meanwhile, the trade war is doing permanent damage to the Chinese economy every month since once production networks have been relocated to lower-cost countries in Southeast Asia, they are unlikely to return to China. The United States faces no such economic pressure.

Trump clearly relishes playing the cat. Trade policy is one of the few non-military areas where he can play his own game without much fear of intervention from Congress or the courts. It seems rather less likely that Xi enjoys playing the mouse. As Xi knows better than any of us, "it doesn't matter whether a cat is black or white, as long as it catches mice." Trump may have let the mouse go for now, but he can catch it again anytime. And that must make the mouse very nervous indeed.

Salvatore Babones is an adjunct scholar at the Centre for Independent Studies in Sydney, Australia, and an associate professor at the University of Sydney.