Game Over: The F-35 Will Be Ready to Attack From Aircraft Carriers 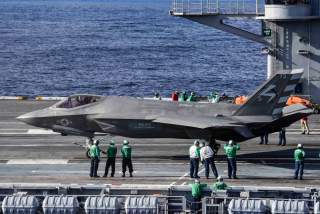 Key Point: A carrier-launched stealth fighter would be a game-changer.

The Navy's stealthy carrier-launched F-35C is now moving much closer to combat readiness after conducting "carrier qualification" exercises from the USS Carl Vinson off the coast of Southern Calif., service officials said.

The qualifications are designed to prepare pilots for the rigors of carrier air wing combat missions and further prepare the aircraft and its weapons systems for operational service.

"Being at sea for FRS (fleet replacement squadron) CQ gives us practice at what we do on deployment: launching and recovering aircraft," Hammond. "We can't always be underway with Carrier Air Wing, so these operations help us stay sharp and hone our craft while helping new pilots gain proficiency."

"The reduced setting of repeatable release hold back bar performed well both test and fleet are pleased with the progress made in reducing the force of the ocillation seen during catapult shots. The fleet will continue the assessment of the bar," Joe DellaVedova, spokesman for the Joint Program Office, JSF, told Scout Warrior.

Being engineered for a carrier, the F-35C's 51-foot wingspan is larger than the Air Force's F-35A and Marine Corps' F-35B short take-off-and-landing variants. The fighter is configured to carry 19,000 pounds of fuel and 18,000 pounds of weapons.  It can fire two AIM-120 air-to-air missiles and two 2,000-pound Joint Direct Attack Munitions.  The F-35C can reach speeds up to Mach 1.6 and travel more than 1,200 nautical miles.

Previous testing of the aircraft involved catapulting the stealth fighter off the aircraft carrier runway deck with a much lighter load of weapons; the full complement of armaments for the F-35C is designed to maximize its potential mission envelope and allow it to drop laser and GPS-guided precision Joint Direct Attack Munitions, use air-to-air weapons in the event that the aircraft needs to dogfight or destroy enemy drones and fire a 25mm gun.