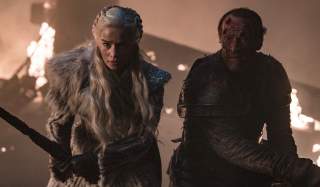 Hey nerds, quit trying to find real-world lessons for military operations in Game of Thrones. Or any T.V. show, movie, comic book, video game or sport, for that matter.

The epic third episode of Games of Thrones’ eighth and final season—in which a human army at great cost defends a castle against a huge force of reanimated corpses—has inspired an awful lot of armchair generalship in the media.

Meghan O’Keefe at Decider criticized human king Jon Snow and his commanders for deploying their forces outside the walls of Winterfell castle instead of fortifying inside.

“Sure, I didn’t attend West Point, but I have studied Ancient Greek military history, spent my childhood vacationing on historic battlefields and consider European history (with a concentration on medieval wars) a hobby horse of mine,” O’Keefe wrote.

“As a history nerd,” she continued, “I know the most important thing when you’re defending a castle from a siege is to … STAY INSIDE THE DAMN CASTLE.”

Blake Stilwell at We Are the Mighty likewise questioned the human leaders for deploying their Dothraki cavalry too early in the battle while also failing to effectively coordinate their two fire-breathing dragons.

Meanwhile, an anonymous Army National Guard soldier writing at Wired rhetorically wagged his finger at Snow and company for failing to prepare the battlefield in advance of the undead army’s attack.

The army of the living “could have used the time they had to incorporate a network of complex obstacles in front of Winterfell to slow and disrupt the waves of the undead,” the soldier wrote. “Instead, they left the field wide open.”

Sure, these articles and many more like them are fun. But they all suppose that many people watch or read fantasy as a form of military education. And that fantasy can fill in for real combat experience.

Game of Thrones is based on the book series A Song of Ice and Fire by George R.R. Martin, a conscientious objector who avoided service in the Vietnam War. The series’ project is not to realistically to depict national strategy, military operations or battlefield tactics in any way that’s useful to real-world military leaders.

Instead, Martin’s project is moral. He aims to explore notions of good and evil and the ambiguity in between these absolutes. “Too many contemporary fantasies take the easy way out by externalizing the struggle, so the heroic protagonists need only smite the evil minions of the dark power to win the day,” Martin said.

“And you can tell the evil minions, because they're inevitably ugly and they all wear black,” he added. “I wanted to stand much of that on its head. In real life, the hardest aspect of the battle between good and evil is determining which is which.”

Thus a spiritual theme, not military realism, shapes the A Song of Ice and Fire books and the Game of Thrones T.V. series and dictates what happens on their fictional battlefields.

It’s important for the Dothraki cavalry to “unrealistically” ride to their deaths. Their hopeless charge demonstrates their fervent loyalty to their monarch and gives the monarch a reason to grieve … and to doubt herself.

It likewise is vital that the dragons largely stay out of the fighting. Game of Thrones revels in depicting, via painterly imagery and speaker-rumbling sound design, the dragons as powerful creatures.

So powerful that the show, in fact, can’t afford to let the dragons get too involved in combat. There otherwise would be scant opportunity for human characters on the ground to confront their own mortal fears, risk their lives in combat and suffer, learn and grow as a result.

The point is, Game of Thrones doesn’t want to teach you anything about the conduct of war except that war is scary, people get hurt waging it and that hurt can shape people’s morality, relationships and sense of self.

So stop watching and writing about Game of Thrones as though it were real and militarily realistic. And while you’re at it, please also stop looking for lessons about warfare in Star Wars and American football.

Take to heart what one reader of The New York Times wrote in 2008, at a time when many in the media and even some U.S. military commanders for some reason were keen to apply sports strategy to the war in Iraq.

“Please stop comparing football to war,” the reader wrote to the newspaper. “It’s not even violence, even if on the harder side of human contact. Football is as violent as war, as gridiron collisions are car and plane crashes.”

The fictional drama of Game of Thrones isn’t real warfare any more than real warfare is a fantasy story about zombies and dragons. You shouldn’t expect otherwise.