As Gaza Falls Apart, The Next Israel-Hamas War Is Becoming More Likely 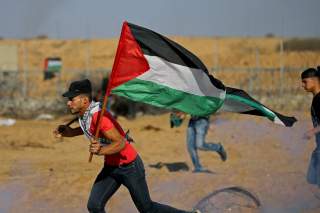 Key point: By no means is the current mutual deterrence an ideal long-term solution for either the Palestinians or Israelis, but it remains preferable to the preceding cycle of full-scale war.

A casual observer could be forgiven for presuming Israel and Hamas again stand on the precipice of war as rockets fly over Tel Aviv and the Israel Defense Forces (IDF) strike key Hamas leadership targets in response. Despite the volatile situation in Gaza this past year, including ongoing attacks incited by Hamas along the border, both sides are exploring a ceasefire rather than escalating to a fourth major conflict in a decade. A form of mutual deterrence has evolved that enables, and indeed encourages, both sides to limit the violence and avoid full-scale war.

While offering a sliver of hope for stability, this tenuous equilibrium between a liberal democracy and a terrorist group could collapse in the near future, due to Gaza’s humanitarian situation and the ubiquitous potential for miscalculation between adversaries.

The current incentive for both sides to limit the violence results from various military and political factors in recent years. On the operational level, Israel’s ability to intercept rockets and detect cross-border tunnels from Gaza limits the amount of damage Hamas can inflict, mitigating Israel’s imperative to respond as forcefully or rapidly as it did before these defenses came online.

Furthermore, improved technical and intelligence capabilities now enable Israel to target Hamas with greater accuracy, thereby limiting inadvertent Palestinian civilian casualties that could lead to aggressive Hamas retaliation. The IDF has also prevented Hamas from successfully exploiting the March of Return protests to breach the Gaza security barrier and attack nearby Israeli communities, which likely would compel Israel to employ greater force to defend the border than it does currently.

At the same time, Hamas’s complex tunnel network within Gaza helps deter any Israeli military escalation on the ground. As was evident in the 2014 conflict, these tunnels give Hamas and other militant groups operational flexibility and tactical surprise to impose serious costs and delays on an IDF ground offensive—even a limited one—into Gaza’s dense urban terrain.

Strategic concerns also help dissuade Israel from escalation in Gaza, even as Hamas continues its indiscriminate attacks. Another war on Israel’s southern front would distract from its primary concern: the much bigger threat from Hezbollah and Iran on its northern borders. Moreover, while a lesser threat, another Gaza war nevertheless could create real economic costs for Israel.

Ultimately, a full-scale IDF occupation of Gaza would leave Israel with the unwanted responsibility of overseeing a territory careening towards humanitarian crisis. Even in 2014, when the humanitarian situation was not as bad as today, the prospect of escalating the war to eliminate Hamas appeared to entail more military and political costs, including reoccupying Gaza, than Israeli leadership was willing to bear. Keeping Hamas in place as a “return address” gives Hamas something to lose if attacks from Gaza escalate significantly.

For its part, Hamas’s need to stave off Gaza’s economic implosion is more pressing than its fundamental long-term goal of destroying Israel. Certainly, the latter becomes far more difficult if the former comes to pass. Indeed, Hamas fears the further deterioration of a Gazan economy already plagued by worsening water and electricity shortages, and has responded violently against protestors demanding reforms. Recent decisions by the United States to end its assistance to the Palestinians and by the Palestinian Authority to stop paying for Gaza’s electricity sharpen the dilemma for Hamas.

For now, at least, this incentivizes Hamas to incite enough violence, including through the widely-publicized March of Return, to focus international attention (and possibly aid) on Gaza’s bleak internal situation—while avoiding provoking a large IDF response that could further undermine Hamas’s grip on Gaza. Thus far, Hamas has been able to leverage the March of Return into small gains, such as expanded fishing zones.

It also helps that Israel and Hamas have begun talking to each other more productively. Indirect lines of communication, often through Egypt and Qatar, allow both sides to have public disputes while still conveying the conditions under which de-escalation would be possible. Understanding that Israel does not need or want to start a war, Hamas has been free to operate below the point at which Israeli leadership would have no choice but to escalate in self-defense.

These operational and strategic conditions have combined to promote some basic semblance of stability, though clearly not peace. Compared to the relative regularity of major conflicts from 2008-2014, the ongoing lower level tit-for-tat skirmishes and one-off strikes may remain the norm as each side lacks any real incentive to escalate to all-out war.

Knowing that the current Israeli leadership is hesitant to go there—even while remaining ready to respond proportionately to smaller provocations—Hamas can calibrate its use of violence in pursuit of greater international attention and concessions to shore up its position in Gaza.

Yet several variables could undermine this relative stability and raise the risks of another major conflict. Foremost is the continued worsening of conditions inside Gaza, with the impending end of Qatar’s financial support for Gaza’s electricity supplies potentially serving as a trigger. Simply put, the unfolding humanitarian disaster in Gaza could worsen to the point where the risks to Hamas of a major war with Israel begin to seem tolerable by comparison to a popular revolt.

Mutual deterrence also could spiral apart through accidental escalation, as it has many times in many places before. The resumption of night raids along the border fence, where protestors set fires and launch incendiary devices into Israel, suggests Hamas is probing for the upper bound of Israel’s tolerance for violence. Hamas is therefore able to fulfil its self-anointed mandate as a Palestinian resistance movement, without resuming rocket fire that could necessitate massive IDF retaliation—and which in turn could hurt Hamas’s popularity or ability to govern Gaza. However, Hamas might easily, if inadvertently, push this tolerance too far.

Moreover, Hamas contends with other Palestinian militant organizations inside Gaza, none of which must worry about ruling Gaza and some of which are more radical even than Hamas. For instance, Palestinian Islamic Jihad has its own rocket arsenal and on occasion has not been afraid to use it without Hamas’s blessing. If Gaza’s economy deteriorates further and Hamas’s leadership seems increasingly tenuous, these groups may feel pressured or emboldened to act against Israel without Hamas’s approval.

By no means is the current mutual deterrence an ideal long-term solution for either the Palestinians or Israelis, but it remains preferable to the preceding cycle of full-scale war. However, without a stopgap to Gaza’s looming collapse, Hamas and Israel could head towards a fourth major conflict since 2008, regardless of whether either side wants it.