Gaza Must Prepare for Israel’s Next War 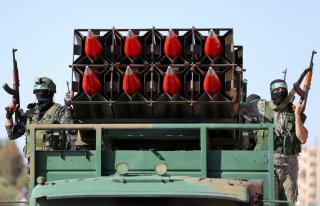 Eleven days of another asymmetrical Palestine/Israel confrontation. America’s most sophisticated technology left behind a trail of devastation, including the life of more than sixty children, and a generation born under years of Israeli blockade with little hope for a future.

In Gaza, the mothers that perished under rubble with their children are called the lucky ones. They don’t live to grieve the loss of their progeny.

Israel’s open range “shock and awe” aimed to inflict maximum pain by targeting residential towers in the City of Gaza, hovels in refugee camps, coronavirus testing clinics, and cutting power and halting water treatment plants. To hide the extent of their atrocities, Israeli jets flattened the tower for the only independent media center connecting the besieged strip to the outside world.

On the Israeli side, and according to official statements, Palestinian resistance fired approximately 4,300 rockets. The Iron Dome, financed by American taxpayers, intercepted 90 percent of the rockets and the Israeli military allowed some to fall into open space.

According to Israeli organizations Peace Now and B’Tselem, since the signing of the Oslo Accord in 1993, the Jewish population in the occupied West Bank, including East Jerusalem, had grown by 250 percent, from approximately 250,000 to 620,000.

Moving Jews to occupied Palestinian land contravenes with Oslo II of 1995, where Article XXXI, clause 8 calls on “The two parties view the West Bank and the Gaza Strip as a single territorial unit, the integrity and status of which will be preserved during the interim period.”

In 2001, Netanyahu boasted on video of his intention to take a different approach to the Palestinian Israeli understanding, asserting “I’m going to interpret the Accords in such a way that would allow me to put an end to this galloping forward to the ‘67 borders.”

When asked how he intends to address U.S. concerns, the supposed sponsor of the peace accord, Netanyahu bragged of his prowess, stating, “America is a thing you can move very easily.”

Netanyahu and other Israeli leaders, hitherto, took calculated measures to gut out the core Israeli obligations in the Oslo Accord. Israeli disregards to signed agreements, coddled by American administrations’ unwillingness to honor its “impartial” role, and the silence of world powers, has only emboldened Israeli repression of Palestinians.

More than a quarter of a century later, succeeding right-wing Israeli governments have fragmented the “integrity and status” of the Palestinian territories into isolated islands, linked by “Palestinian only” Israeli checkpoints, surrounded by “Jewish only” outposts, and cordoned East Jerusalem from the West Bank by a wall of expansive illegal colonies.

In violating the pertinent clauses of the Oslo Accord, Israeli leaders ravaged the West Bank landscape, including East Jerusalem, by transplanting zealots into “Jewish only” designated settlements to prejudice the outcome of negotiation during the “interim period.”

Meanwhile in Gaza, Israel placed a strict blockade under the pretext of stopping weapons from entering the enclave. Measures described by Israeli government adviser Dov Weisglass in 2006, "to put the Palestinians on a diet, but not to make them die of hunger."

The latest clashes had shown that while it is certain that the more than fourteen years of Israeli prescribed “diet” have increased the suffering of the civilian population, however, it had neither secured Israel nor weakened the ingenuity of people resisting aggression.

Promising to rebuild Gaza, President Joe Biden is traveling, again, on a road rotted with potholes and humps making a lasting truce less likely if the United States continues to sweep the root cause under the carpet.

For a ceasefire to endure, these basic questions must be answered: will Israeli governments comply with signed peace accords? Will the ceasefire end the blockade on the two million people in Gaza? Will it cease the illegal construction of “Jewish only” colonies on Occupied Palestinian land? Will it end the daily humiliation of native Palestinians at the “Palestinian only” Israeli checkpoints? Will it allow Palestinian families to return to their homes in Sheikh Jarrah?

Absent of addressing the tinderbox makes it so that, not if, but when a new spark alights, it will mean yet another larger war. Rebuilding Gaza, only, will do nothing but establish new targets for Israel’s next war. The Biden administration can’t continue excusing Israel’s right to self-defense while its apartheid system wages a nonstop silent war of aggression on more than five million human beings.

It is the occupied, not occupier whose resistance is a form of self-defense and therefore justified. This is not an opinion, but rather, a legal right under international law.

Jamal K. Kanj (www.jamalkanj.com) is an author who has written weekly newspaper columns and publishes on several websites on Arab world issues. He is the author of Children of Catastrophe: Journey from a Palestinian Refugee Camp to America. His recently co-authored book, Bride of the Sea, was published in Germany and Poland. He can be reached at [email protected]