General Patton's Command Car Coming Up For Auction – But is it Really Patton's? 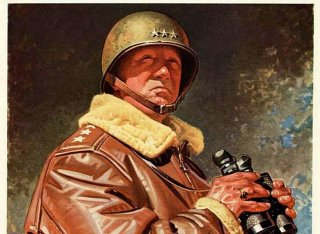 This coming June a very rare military vehicle is coming up for auction—and it could be one of those pieces that should rightfully be in a museum not only because of its rarity but due to its historical significance. In this case it is “General Patton’s Dodge WC-57 Command Car.”

Worldwide Auctioneers, which is handling the sale, listed the vehicle on its website with the information, “This particular command car was a part of the 3rd Army headquarters motor pool; Specially modified for General George Patton with armor plating and high volume horns and siren; Includes ‘three-star general’ and ‘3rd Army HQ’ pennants.”

The Dodge WC Series, which was produced by Dodge/Fargo during the Second World War, was part of a family of light trucks that were used as cargo and weapons carriers, reconnaissance vehicles, ambulances, mobile emergency/field workshop trucks and in some cases radio/command cars. Dodge had been making vehicles for the U.S. military before the First World War and most were based on civilian models.

When the United States entered the Second World War, Dodge was called up to turn its TC pickup into the 1940 VC-1 military truck, which evolved into the WC Series. The open-topped WC-57 was popular with U.S. officers, but that made it a prime target for the enemy. Before heading to France in 1944 to take command of the Third Army, General Patton had his WC-57 modified with armor flaps to protect the radiator and armor plate added under the floor—a WWII version of the “up-armoring” seen on military vehicles in Iraq and Afghanistan.

The vehicle being offered for sale certainly looks like those in period photos, but the auction house doesn’t have any paperwork that specifically links this car to the infamous general. This explains why when another auction house put this exact WC-57 up for sale in 2017 with a pre-sale estimate of $100,000 to $150,000 it failed to meet the $60,000 reserve.

It looks right, but with collectibles—much like art—provenance is everything. That also explains why the description is a bit vague.

“While the auction company does not come right out and say that this is, indeed, a documented vehicle that General Patton used during WWII, the way they are marketing provides sufficient steps for a potential buyer to climb to that conclusion,” John Adams-Graf, editor of Military Vehicles, told The National Interest. “Without the Patton attribution, the vehicle is essentially a $40,000 truck with maybe another $10,000 in modifications.”

Adams-Graf , who has been active in the historic military vehicle (HMV) hobby for decades, did some digging into the history of this particular WC-57 and found that it had been in the collection of the WWII Victory Museum and displayed as “Patton's Command Car.” To pay off some debt the museum sold off a large portion of its collection, including the car.

As noted it has come up for sale, but apart from the fact that it looks like one of the WC-57s that Old Blood & Guts used—and it is believed he had more than one—without the paperwork it is hard to prove Patton’s backside ever sat on those seats.

So will it reach the estimates this time?

“Most who are in the historic military vehicle hobby will recognize the historic insinuation without letting it affect their bidding,” said Adams-Graf. “However, there are always people outside of the hobby who don't recognize that they need to ‘buy the vehicle, not the story.’ In this case, I think the auction company is really counting on that latter category of buyers.”