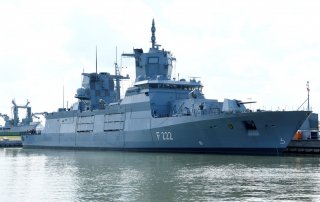 Last month the German Navy’s (Deutsche Marine’s) Frigate Baden-Württemberg conduced sub-system tests in extreme conditions and in realistic combat situations in the South Atlantic. The ship had sailed to Brazil in February to evaluate the on-board systems in hot weather near the equator, where the cooling systems could be appropriately tested.

Such tests are necessary to determine whether a new warship can withstand combat requirements in warm areas of operation, and can only be accomplished after commissioning. The frigate had previously completed its counterpart cold water testing.

The Baden-Württemberg is the first of the F125 class frigate, and she entered service last June. A total of four F125 vessels were contracted by the Kiel-based firm ThyssenKrupp Marine Systems (TKMS). The second of the four planned ships, Nordrhein-Westfalen was delivered to the Deutsche Marine in March.

The new 7,000-ton warships will eventually replace the older F122 Bremen-class frigates that were first entered service in the early 1980s.

“The F125 is the most modern frigate in Germany and one of the most modern frigates in the world,” said Rolf Wirtz, CEO of the ThyssenKrupp Marine Systems, as reported by NavalNews. “Here we are implementing the concept of intensive use for the first time. This is unique worldwide. We are proud to make a significant contribution to the operational capability of our Navy and the defence of our country with these ships.”

About 90% of the systems on the ship were newly developed, and the warships feature a highly complex system that utilizes approximately 28,000 sensors. As a result, the F125 class is highly automated and requires a crew of only 126, compared with the 200 sailors that were required on the F122 frigates. However, if the need for more sailors arises, the crew can be increased to 190.

Despite the smaller crew size, the F125 ships were designed to remain in the operational area for up two years, which could reduce the time needed in long transit journeys.

The Baden-Württemberg has only been at sea since the beginning of February, but when she left her home port of Wilhelmshaven there were no restrictions on public life in Germany due to the coronavirus. However, since March 10, no one has been allowed to leave the ship and no one has been allowed on board in order to keep the crew free from the highly infectious COVID-19. This has not impacted the trials or tests, but a planned shore leave that would have lasted several days had to be canceled.

For this year’s tests, the Baden-Württemberg traveled a total of some 13,500 nautical miles to Brazil and back to Germany. Sadly, while she has visited numerous ports—including Salvador de Bahia—the crew has not been allowed to go ashore. The ship will next return to Germany, where after a quarantine period the crew may finally get to set foot on dry land.