Germany’s Air Force Is in a Lot of Trouble 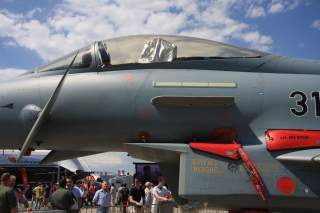 Germany’s Air Force is in a lot of trouble, according to its leader

“The Luftwaffe is at a low point,” Lieutenant General Ingo Gerhartz, Germany’s new chief of the air force, said in a speech on June 27, Reuters reported. The Luftwaffe is the official name of the Air Force.

Gerhartz added: “Aircraft are grounded due to a lack of spare parts, or they aren’t even on site since they’re off for maintenance by the industry,” Part of these problems are called by bureaucratic ineffectiveness, he implied. According to Gerhartz, a 400-hour inspection of Germany’s Eurofighters was supposed to take seven months. It ended up lasting fourteen months.

Besides bureaucratic issues, Gerhartz also said that the German Air Force needed bigger and more predictable budgets from the parliament. “Gerhartz urged lawmakers at the Wednesday event to back a more sustainable spending plan that would allow the air force to rebuild its equipment and improve planning for new weapons and upgrades to existing systems,” Reuters said.

U.S. President Donald Trump is sure to agree with Gerhartz on this point.

Trump has repeatedly chastised European NATO members for not spending enough on defense. He is expected to use a NATO summit later this month to further reinforce this point.

In May, German Chancellor Angela Merkel suggested that her country would sustain steady increases in military spending in the years ahead. In fact, she went so far as to suggest that NATO’s goal of spending two percent of gross domestic product (GDP) on defense was “not completely beyond the imagination.”

Berlin currently spends about 1.2 percent of its GDP on the military. German Defense Minister Ursula von der Leyen said this would increase to 1.3 percent in 2019, with the goal of reaching 1.5 percent by 2025.

But Finance Minister Olaf Scholz has suggested that the percentage would actually decrease after 2019.

The issues raised by Gerhartz hardly came out of nowhere.

When Germany was considering joining the anti-ISIS coalition strikes in 2015, the military issued a report about the state of its Tornado jets. The results were startling.

According to the German newspaper Deutsche Welle, the report said that “less than half of its arsenal of Tornados was actually ready for deployment surfaced. Out of 93 commissioned fighter jets, only 66 were operational in general terms and only 29 were combat-ready at the current time.”

More recently, earlier this year, Germany said that only 26 Tornados are combat ready. The Tornados are the planes Germany uses as the delivery system for U.S. tactical nuclear weapons in the country.

If anything, Germany’s Eurofighters are in even worse shape.

In May, the German magazine Der Spiegel reported that only four of Germany’s Eurofighters were ready for combat. The major problem was that out of 128 Eurofighters, only ten didn’t suffer from a defect in their defense system.

As Deutsche Welle explained, “The problem stems from a cooling liquid leak in the aircraft's wing pod sensors, which are used to recognize hostile jets or incoming attacks. Without the defense system the Eurofighter jets are not combat ready.”

But that was only the beginning of the problems.

Besides the shoddy defense system, the Der Spiegel report said that Germany only had enough missiles for four of the aircraft to engage in combat. Berlin has disputed this figure, saying that thirty-nine Eurofighters are classified as combat ready. However, Der Spiegel suggests that the German Air Force is counting any of the planes that can fly as ready for battle.

Besides all its technical problems, the German Air Force has seen turnover among its top leadership. As noted above, Lieutenant General Ingo Gerhartz is the new chief of the air force, having only taken the job about a month ago.

As The National Interest previously noted, Gerhartz’s predecessor, Lieutenant General Karl Muellner, was fired from his post earlier this year. It is widely believed that he was dismissed because he refused to stop making the case that his service needed the F-35 Joint Strike Fighter to replace its aging Tornado fleet.

“The Luftwaffe considers the F-35’s capability as the benchmark for the selection process for the Tornado replacement, and I think I have expressed myself clearly enough as to what the favorite of the air force is,” Muellner told reporters last year.

The German Defense Ministry is known to favor the Eurofighter as the Tornados’ replacement, and when Muellner refused to stop speaking out he was let go.