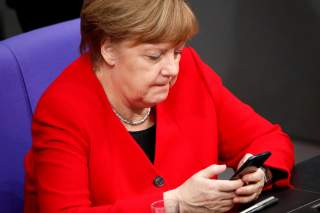 Perhaps the only people more terrified of Big Tech (AppleMicrosoftAlphabetAmazonFacebook) than American anti-tech activists are America’s economic competitors. Take Germany, for instance. It’s the economic engine of Europe. And for some US politicians, such as Sen. Elizabeth Warren, it’s an example of capitalism done right. Germany makes stuff! It has a trade surplus!

But many German business and political leaders don’t see things that way. Not at all. But how could they, really? As a great new piece in the Financial Times notes, not only is Apple alone worth more than 20 times German industrial giant Siemens, but “at $1.35tn the iPhone maker is worth more than the entire Dax index of Germany’s 30 leading companies.” That disparity, FT reporters Patrick McGee and Guy Chazin continue, “is a striking example of how Europe’s largest economy risks being left behind by the 21st century tech boom.”

And that view isn’t just a bit journalistic hyperbole. Listen to the Germans themselves fret about potential disruption from Silicon Valley with even their auto industry at risk:

— “Europe is currently not in a position to compete, really, when it comes to these platform technologies,” says Merck CEO Stefan Oschmann.

— “We don’t have the software skill and size. We don’t have a software industry,” says Volkswagen CEO Herbert Diess. “The car is no longer just a means of transport. And that also means the time of classic automobile manufacturers is over.”

— “The big picture story is that we have missed the train on technology — the sector that is dominating the 21st century,” says Carsten Brzeski, chief economist for ING Germany.

— Even Angela Merkel, Germany’s chancellor, says she’s worried that the country might end up as merely an “extended workbench” in a world where “it’s no longer enough to merely sell a product. One also needs to develop new products from the data on these products.”

But this may be the most telling bit of all, which I will quote at length (bold by me):

Alexander Rinke, co-chief executive of Celonis, a German software company valued at $2.5bn, says he has spent a lot of time trying to figure out why Germany has lost the spirit of the Gründerzeit — the “founding epoch” in the late 19th century when Daimler, Bayer, BASF, Deutsche Bank and Allianz were all established. … “I don’t think it’s the market and I don’t think it’s the culture, which gives me hope because those two things will be hard to change,” he says. “And I don’t think it’s the talent, because when you look at academia, Germany is making leading contributions to many fields.” … He believes the absence of venture capital to encourage entrepreneurship in the last half-century has played a central role in why the innovation pendulum shifted to the US. … “That financial infrastructure — the way people invest capital and allocate capital — is probably the main reason why Apple, Google and Facebook are all American, and none of these companies is German or European,” he says.

The German opinion on the importance of venture capital is particuarly interesting since the new hot-take view in America is that venture capital is overrated. (If true, why worry about big new taxes on investment and wealth?) It’s a perspective that also fits nicely with the idea that Big Tech is somehom bad for America and should be heavily regulated and perhaps even dismantled. But for Germany, being home to super-valuable and mega-innovative tech titans looks like a great problem to have.

This article by James Pethokoukis first appeared in AEI in January 2020.