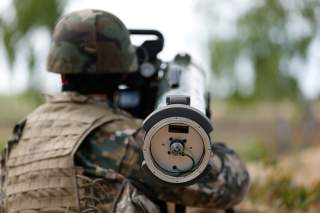 Key point: The Israel spike missile is very powerful and has been purchased by other countries around the world.

Germany is one of the biggest customers for the Israeli Spike missile. Germany fields the Spike Lr missile under the name Mehrrollenfähiges Leichte Lenkflugkörpersystem, or MELLS, as the primary anti-tank armament of their infantry fighting vehicles. These missiles have practically taken over the role of the French/German MILAN anti-tank missile, which are being retired.

But what new capabilities does it bring to the table? How is MELLS more versatile than the earlier MILAN missile?

Germany first bought the Spike-LR in 2015, replacing the MILAN missile in the role of an infantry-portable tripod mounted anti-tank missile. The system as procured had nearly double the range of the earlier wire-guided MILAN. It also added a fire-and-forget mode of firing the missile, while still giving the operator control of the missile in the fire-and-observe mode. The live missile “feed” from the MELLS seeker makes tracking and hitting targets at range easier than the MILAN.

The MELLS was also slated for integration in Germany’s next generation Puma infantry fighting vehicle (IFV). The level of integration surpasses the level to which the MILAN was integrated with the earlier Marder 1 IFV. With the Marder 1, a vehicle crewman has to stick their torso out of the turret to look use the Milan firing post, which is attached to the vehicle itself.

With the MELLS, the missile is guided through existing sights and screens on the Puma. The missiles are housed in a dual pod on one side of the turret, allowing for a rapid second shot. The gunner’s screen displays the seeker feed from the missile, as the firing post would on the infantry version of the missile. The status and mode of operation of the missile are visible to both the gunner and commander on the regular displays of the Puma. This is far safer and more ergonomic for the Puma gunner.

Ironically, the MELLS is being retrofitted to Marder 1A5s to serve the same role as the MILAN did. Some time between 2016 and 2017, the Bundeswehr ordered Rheinmetall to conduct a feasibility study to determine if MELLS could be integrated onto the Marder 1. Special attention was paid to how vibration from the Marder might affect the missile’s hardware.

Tests were successful, and in 2017 the Bundeswehr ordered 44 MELLS kits which were integrated onto 35 Marder 1s. The level of integration of these missiles onto the older vehicles is the same as the MILAN, the gunner must rise out of the turret to interact with the firing post to shoot the missile.

But this “old school” arrangement isn’t totally outdated. The point of attaching the MILAN firing post to the Marder in a relatively non-integrated manner was that it could be easily detached if the infantry squad inside the Marder needed more anti-tank firepower when they dismounted. Similarly, the Marder-integrated MELLS can easily be detached from the Marder turret and brought along with the infantry.

Rheinmetall is said to be looking for ways to integrate the MELLS onto the Marder 1A3s and 1A5A1s, other versions of the Marder 1 still in service in the Bundeswehr.

What’s next for the MELLS in German Service?

Lithuanian Boxer wheeled IFVs mount Spikes on the side of their 30mm autocannon turret, so a similar upgrade may be in the cards for the German Boxers. MELLS may even be placed on the German Fuchs APCs. MILANs were placed on Fuchs APCs during the Cold War, and a return of this modification may occur if Fuchs users, Jäger light infantry, feel the need for additional anti-tank firepower.

Charlie Gao studied political and computer science at Grinnell College and is a frequent commentator on defense and national security issues. This first appeared in March 2019.