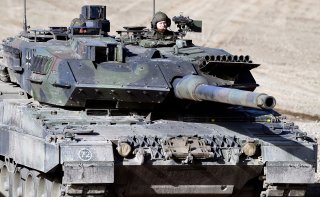 Several nations have been dubbed sleeping giants throughout history. Russian president Vladimir Putin may have awoken one in Germany, which has responded to Russia's invasion of Ukraine by passing a special €100 billion fund to improve its armed forces. German chancellor Olaf Scholz announced the decision on Sunday.

The boost in funding marks a significant reversal of decades of post-Cold War foreign policy. In addition, Scholz said Germany will adhere to NATO’s defense spending goal by spending 2 percent of its GDP on defense. As a result of the dramatic shift, Germany is expected to become the third-largest global military spender.

"The horrific images from Kyiv, Kharkiv, Odesa and Mariupol show the whole ruthlessness of Putin," Scholz said in an impassioned speech to German lawmakers. "It is clear that we need to invest significantly more in the security of our country in order to protect our freedom and our democracy."

Scholz also said that Germany will seriously ramp up its military force.

"We need planes that fly, ships that sail, and soldiers who are optimally equipped for their missions," Scholz said. The Bundeswehr has suffered from financial and equipment shortages for years.

Last month, German army chief Alfons Mais had described the state of the country's military as "more or less bare."

But that could change in the years to come.

"The announcements from the Bundestag this weekend will mark an extraordinary and unexpected shift in defense policy," said Madeline Wild, associate defense analyst at data analytics company GlobalData, via an email. "The promised growth will catapult Germany into becoming the third-largest spender on defense globally, behind only the U.S. and China."

Wild also said that GlobalData forecasts an annual German defense budget of $83.5 billion in 2024, equating to a 45 percent increase on 2021's budget of $57.5 billion.

"As the third-largest defense spender, Germany will only have to focus on financing conventional forces thanks to its non-nuclear status, with the budget not having to go towards funding a nuclear deterrent, which can be a budgetary black hole for nuclear states," she wrote. "Instead, the Bundeswehr can finance areas that need drastic modernization after suffering years of low defense spending. The aerospace domain will likely receive substantial funding, as the process of replacing the Tornado fleet continues and the Army EC-665 Tigers and NH-90 TTH's (helicopters) have struggled to achieve readiness levels much above 15 percent. Additionally, the (Future Combat Air System) program is likely to see significant investment."

This will also be welcome news for the global arms industry.

"Competition amongst global defence suppliers will be fierce with the likely beneficiaries being domestic German primes and their European counterparts that are already well established players in the German defense market," Wild wrote.

Germany's military has been on the decline for decades. In 2015, German soldiers used painted broomsticks in the place of machine guns during NATO exercises. Putin may have managed to help spur Germany's new rearmament.

"For years there has been public resistance to increasing the Bundeswehr budget on a level substantial enough to reach the two percent of GDP target set by NATO," suggested Wild. "The COVID-19 pandemic compounded these policies with few willing to push military spending in the face of economic need in other parts of government. The German government, now led by Olaf Scholz, has promised that Germany will meet NATO's requirement that members spend two of their GDP on defense by 2024. Also announced in the Bundestag this weekend was the creation of an off-budget fund of €100 billion ($113 billion)."