Germany Will Continue to Hedge Its Bets With Russia 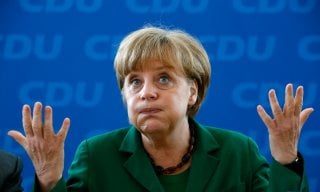 Every year the Levada Center, Russia’s most reliable pollster, publishes a Top Ten list of the country’s friends and enemies. In the 2021 edition, Germany had the singular distinction of being ranked as both a friend and an enemy of Russia. From the German governmental perspective, such Janus-like standing among Russians can be a source of satisfaction, proof that Berlin’s efforts to hedge its geopolitical bets are paying off.

The upcoming federal elections in Germany may well result in a change of government, installing a Green-led coalition and sending the Christian Democrats into opposition. But this fall’s vote is unlikely to alter Germany’s approach towards Russia much. Regardless of the new governing coalition’s composition, pragmatism will continue to rule in Berlin.

For most of the twenty-first century, Germany has found itself stuck between a fickle United States and a menacing Russia. Given the prevailing circumstances, the pragmatic course for Germany is to walk a diplomatic tightrope and try to keep both Washington and Moscow happy.

Germany’s determination to see the Nord Stream 2 natural gas project through to completion is not a reflection of affinity for Russia’s illiberal political model but more a byproduct of concern about the Kremlin’s bullying instincts. Russian leader Vladimir Putin’s penchant for unleashing digital-borne malevolence, or worse, is well documented. Germany is simply ripping a page out of Sun Tzu’s playbook, keeping its friends close and its enemies closer–especially when it can’t count on its biggest friend, the United States, to have its back.

Since the European Union tends to follow Germany’s lead, we can likely expect more muddle from Brussels toward Russia. The EU’s frontline states, in particular, Poland and the Baltics, want to harden the line against Russia. But Germany and France aren’t about to let that happen. At the same time, the EU’s preference for consensus is preventing Germany from offering Russia fresh carrots, such as an EU-Russian summit meeting.

Berlin’s foreign policy approach will shift only if one of the main external factors changes. Or put another way, Germany will tweak its policy either when the United States again becomes a reliable friend, or when Russia embraces rules-based behavior.

The odds are long that Putin will experience a geopolitical epiphany, start adhering to post-war norms and break the Ukrainian gordian knot that constrains EU-Russian relations.

So if the United States wants Germany to stop hedging, then Washington needs to convince Germany and the rest of the EU that it is a dependable partner, determined to refurbish the pillars of a strong trans-Atlantic partnership and renew its unshakable commitment to multilateralism.

The Biden administration has made a strong start in this direction. But Germany and the EU will remain cautious for a while. For the past two decades, the United States has zig-zagged wildly, careening from American exceptionalism under George W. Bush, to conventionalism under Barack Obama, to spasmodic unpredictability under Donald Trump. A half-year or so of steadiness under Biden isn’t nearly enough time to reassure Germany and the EU about the predictability of U.S. foreign policy. And Biden can do only so much to dispel Europe’s wariness. As long as Trump remains a presidential possibility in 2024, Europe will likely continue to hedge. Trumpism in the United States needs to fade from the political scene before Germany and the EU can feel confident enough to give Putin a diplomatic stiff arm.

Justin Burke is the publisher of Eurasianet, a news outlet covering developments in the former Soviet Union. During the 1990s, he was a foreign correspondent for the Christian Science Monitor, reporting from both Moscow and Bonn/Berlin.

The opinions expressed in this commentary are the author’s own and do not necessarily reflect the editorial stance of Eurasianet.org