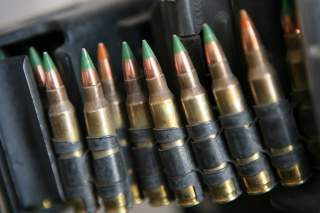 In the 1980s, many countries were looking to transition from rifles that fired the older 7.62x51mm round to ones that could fire the new 5.56x45mm round. France had adopted the FAMAS in a slightly modified version of this caliber, while the United States had been using the M16 since the 1960s. But many countries hadn’t transitioned yet. Much of Europe, including the UK and Germany, were still using earlier rifles such as the German G3 or Belgian FAL.

Heckler & Koch (H&K), one of the designers and manufacturers of the G3, aimed to fill this void with the new G41 rifle. Taking the same “standard” magazines as the M16 and some other rifles, it aimed to replace the G3 in German service and possibly on the export market. In many ways, it aimed to be H&K’s M16. But the rifle flopped hard, seeing adoption only in small numbers by a few militaries.

The G41 was designed primarily as a rifle to arm the Bundeswehr as a companion to the more advanced caseless G11. The G11 was highly advanced and incorporated a lot of new expensive technologies; it would be hard to outfit the entire Bundeswehr with them at once.

The G41 provided an alternative that was based on the conventional roller-delayed blowback design all prior H&K firearms used, both as a technological hedge and as an easily mass produced arm that could rearm the rest of the Bundeswehr in 5.56 that fed from NATO standard magazines (STANAG).

Compared to the earlier HK33 rifle that was H&K’s first roller-delayed offering in 5.56, the G41 exhibits considerable influence from the M16. Like the M16A1, the G41 features a dust cover and forward assist, although this was marketed as a “silent bolt closure device.” It also featured a last round bolt hold open, taking advantage of the cut on the STANAG magazine meant for activating these catches.

It also featured other generic improvements of the second-generation of H&K roller delayed firearms. Unlike the HK33, it featured the later “pictogram” trigger pack, which was more ergonomic and supported more fire modes (safe, single, burst and auto) versus the simple “S-E-F” trigger packs of the HK33 and variants.

The G41 had a higher rate of fire at 850 rounds per minute versus the 700 rounds per minute of the earlier HK33, presumably due to a lighter bolt or heavier return spring. The twist rate of the standard offering was also the slower 1:7 twist needed to the fire the new Belgian SS109 round (adopted by the US as M855).

The G41 competed against the M16A2 in U.S. trials in the 1980s and lost. It also lost to the Beretta AR70/90 in Italian service rifle trials (being sponsored by Franchi, in cooperation with H&K). Small numbers were bought for the Danish Jægerkorpset and Frømandskorpset special operations forces. Another “large” user is the Turkish Gendarmerie, which built G41s under license and still uses them to this day.

So why did the G41 fail despite modernizing the old successful H&K design? On paper, the G41 provides many advantages over the M16A2. The design is more modular and compact, being able to readily accept folding stocks. The fire selector is more ergonomic requiring a shorter throw to be switched between the modes, albeit a bit stiff. It has a free floating barrel for increased accuracy versus most M16s.

The roller-delayed mechanism also requires a long and costly manufacturing process. Following the failure of the G41, H&K’s later guns such as the G36, UMP and MP7 all made heavy use of polymers to reduce manufacturing cost. While exact numbers are uncertain, it’s likely the G41 cost significantly more than the M16A2 or Beretta AR70/90 it was competing against.

H&K stopped manufacturing the G41 sometime in the 1990s, although it still appeared in H&K catalogs in the early 1990s alongside shortened versions of the HK33. Nowadays the rifle is almost totally obsolescent, having been surpassed by far lighter, modular, ergonomic rifles.

Updated variants of the M16 have gone on to replace it in the service of most countries, capitalizing on the M16 platform’s lightweight while integrating new features. Still, it’s an interesting footnote in history in how combining features from two successful designs can result in an underwhelming product.