Get Ready, Iran: B-52 Bombers Are Headed to the Middle East 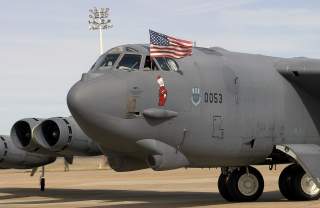 Four US B-52 bombers have been deployed to the Middle East in response to threats of a possible attack by Iran against local American troops in the region, according to U.S. officials.

The bombers, which made up the bulk of the aerial nuclear response fleet during the Cold War and have been serving ever since were deployed from Barksdale Air Force Base in Louisiana on Tuesday.

In addition to the bombers, the U.S. deployed the USS Abraham Lincoln Carrier Strike Group, which will be heading into the US Central Command region in case immediate strikes are needed.

According to CBS News, White House national security adviser John Bolton insisted that while the US isn’t looking for a war, it is more than willing to finish one.

“The United States is not seeking war with the Iranian regime, but we are fully prepared to respond to any attack, whether by proxy, the Islamic Revolutionary Guard Corps, or regular Iranian forces,” he said.

It is unknown what kind of payload the bombers were carrying.

This first appeared in WarISBoring here.