Get Ready for a New Type of Israeli War 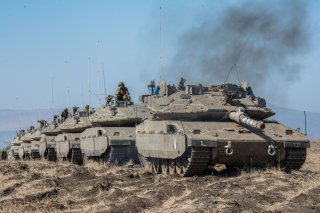 A string of credible reports suggest that Israel recently targeted Iranian forces and infrastructure in Syria. Reporters broadly describe these strikes as a continuation of the “War Between Wars,” a campaign whereby Israel erodes the capabilities of its enemies to forestall the next major conflict.

In a December interview shortly before he retired, Israel Defense Forces Chief of Staff Gadi Eizenkot revealed that Israel had destroyed thousands of military targets in Syria, taking credit for very few. Open-source reports suggest that Israeli strikes have continued apace since then. One high-ranking Israeli official, when asked for the exact number, responded: Who’s counting?

The focus until now has been on when and where Israel strikes, and not what is being destroyed. But that is now changing.

The strike locations are not hard to determine. The majority are in Syria, which is in a state of chaos after years of civil war and now the coronavirus crisis. Iran continues to exploit this chaos by deploying personnel and weapons to the country, in an attempt to prepare for a conflict with Israel. This includes Iranian military brass and Shi’ite militias, but also advanced, lethal weapons. According to current Israel Defense Forces Chief of Staff Aviv Kochavi, the top concern (second only to Iran’s nuclear threat, which appears to have been targeted in recent days) is Iran’s provision of Precision Guided Missiles (PGMs).

Entire rockets, but sometimes just the components and technology to manufacture or convert “dumb rockets” into “smart missiles,” are transiting by way of a “land bridge” from Syria to Lebanon, where Hezbollah seeks to build a formidable PGM arsenal. The terrorist group’s leader, Hassan Nasrallah, is candid about this. Israel’s military strikes are an effort to prevent this arsenal from growing. Both Hezbollah and Israel have been careful to not spark another conflict, wary of an escalation that could have devastating effects. But as Israel has warned, if Hezbollah acquires enough PGMs to pose a strategic threat from Lebanese soil, or acquires the capabilities to produce them, there will be a devastating conflict.

As Iran gained a handle on technology and production, it began to export the know-how, parts, and sometimes the missiles themselves to allies across the Middle East. Notably, it armed proxies such as Hamas and Hezbollah with a range of projectiles with varying capabilities, but not yet with PGMs. The goal was to threaten Israel with overwhelming and potentially crippling waves of missile attacks. Israel, however, developed remarkable missile-defense systems to neutralize that threat.

Frustrated by Israel’s technology, Iran began to export precision-guided munitions to its proxies around 2013. Some may have evasive capabilities, to outmaneuver Israel’s existing missile defense systems. All have the capability to strike within ten yards of their intended target. This is lethal accuracy, representing what Israeli officials call a “game-changer” they vow to prevent.

Iran’s leaders understood that PGMs could be a “game-changer” because they offer terrorists non-state actors, like Hezbollah, the means to achieve air superiority without airbases or combat aircraft. Conveying this technology to proxies, however, is a significant violation of existing norms. No non-state actor had adopted the doctrine, policies, and technology of PGMs, including the accompanying intelligence and navigation capabilities. Israeli officials also worry that the introduction of a PGM strategy in the region could bring about a dangerous new era of conflict.

The PGM program is a high priority for Iran. In a 2018 interview in Tasnim News, Iran’s IRGC Aerospace Force commander, Gen. Amir-Ali Hajizadeh, recounted how in 2009 he presented the Iranian leadership with a plan to modernize the country’s missile program. Supreme Leader Ali Khamenei overruled his entire plan and ordered him to focus on the development of precision-guided missiles.

Grasping the dangers, Israel is interdicting and destroying PGM materials wherever and whenever possible. This explains Iran’s decision in 2016 to change its modus operandi. It mostly halted the transfer of full missiles, electing instead to convert existing unguided missiles into accurate ones. The regime is now transferring the smaller parts (navigation, wings, command and control, and more) via Syria to Hezbollah. The terror group is exploiting a wide array of smuggling routes from Syria to Lebanon (air, ground, and sea) to evade Israeli interdiction.

Early on, the Israelis were deliberately vague about what they were targeting. But Israel has recently adopted a new strategy, exposing Hezbollah’s PGM program and explicitly calling out Iran for proliferating PGMs in the Levant. Last year, Israeli prime minister Benjamin Netanyahu exposed a Hezbollah PGM facility in Lebanon. That one was shuttered. However, Israeli intelligence officials assume that Iran has successfully established new facilities.

Until January, the effort was led by Islamic Revolutionary Guard Corps-Quds Force commander Maj. Gen. Qassim Suleimani, who was killed by a U.S. drone strike in January. But the PGM smuggling operations continue without him, and therefore so do the Israeli strikes. With every strike, the potential for a broader conflagration grows.

Israel currently lacks credible partners to negotiate the removal of Iran forces and PGMs from Syria and Lebanon. Israel mounted an effort to convince the Russians to usher the Iranians out of Syria, explaining to them how that would be in Moscow’s interests. Indeed, Israel has made it clear to Russian strongman Vladimir Putin and his inner circle that so long as the PGM threat continues, and so long as Iran violates Israel’s “red lines” in Syria and Lebanon, strikes will continue. There will be no stability in Syria, and the Russian investment there is at risk. This is a continued source of tension between Tehran and Moscow.

In Lebanon, tensions are also rising. The country is on the verge of a financial collapse after the country defaulted on more than $4 billion in Eurobonds, and hyperinflation threatens. The country could plunge into chaos. The country’s leadership, corrupt as it may be, understand that the last thing Lebanon needs is another war.

With Israeli warnings growing louder, the PGM threat is likely to play a major role in the coming debate at the United Nations on lifting the Iranian arms embargo. It may also play a role in the debate about a financial bail-out for Lebanon. But it is not inconceivable that Israel would decide to neutralize this big problem before either is negotiated. The PGM crisis is nearing a decision point.

Brig. Gen. (Res.) Professor Jacob Nagel is a senior visiting fellow at the Foundation for Defense of Democracies (FDD) and a Visiting Professor at the Aerospace faculty, Technion Haifa. He is the former Israeli acting national security advisor to Prime Minister Benjamin Netanyahu and the head of Israel’s national security council.

Jonathan Schanzer is a senior vice president at the Foundation for Defense of Democracies and a former terrorism finance analyst at the United States Department of the Treasury.