A Gift to Donald Trump? Iran's Fuel Price Hike Is Costing It Dearly 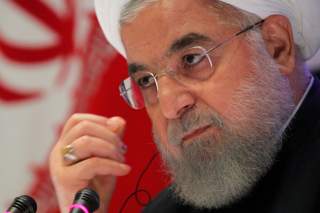 Key point: Tehran didn’t anticipate that there would be such a large and firm public backlash.

Widespread protests gripped Iran for a third straight day following a government-mandated fuel price increase of 50 percent and fuel rationing program introduced Nov. 15. Demonstrators protesting the price hikes have burned and looted more than 100 banks and shops across the country, barricaded highways and massed in the Grand Bazaar, a major cultural center in Tehran. Thus far, the government has responded by shutting down the country's internet and instituting violent crackdowns.

Despite these protests, the largest and most widespread since the United States pulled out of the nuclear deal with Iran and instituted a campaign of economic sanctions against the country, it's unlikely that the current round of demonstrations will threaten the continuity of the Iranian government. But the eventual fallout from the protests and the government's response could prove a seminal moment for Iran's post-sanctions strategy.

The government's decision to boost fuel prices shows the degree of strain U.S. sanctions have put on the Iranian economy. Already, Iranian efforts to manage the large-scale protests in Lebanon and Iraq through its proxies and political influence have stretched its resources, and Tehran certainly anticipated that instituting the first fuel price increase since 2015 had the potential to spark protests. After all, when Tehran introduced a fuel rationing plan in 2007, riots followed. A 2017 proposal to increase fuel prices drew such opposition that it was not implemented. So given that its hands are already full in dealing with regional protest movements and the strong previous resistance to fuel price increases, it follows that Iran wouldn't have introduced the hike this week unless it was an absolute necessity.

Tellingly, in a Nov. 17 Cabinet meeting, President Hassan Rouhani used an economic argument to justify the increase. He argued that Tehran could only afford to continue assisting the poorest Iranians, who bear the biggest burden of U.S. economic sanctions, if it increased oil exports — an option he acknowledged was not realistic — increased taxes or cut subsidies. Rouhani had long criticized the fuel subsidy scheme as too expensive. The International Monetary Fund estimated that fuel subsidies alone represented 1.6 percent of Iranian gross domestic product in the 2017-18 fiscal year and recommended that Tehran take steps to reduce them. Despite the economic prudence of reducing the subsidies, the fuel price increases are proving hard to swallow for a society already dealing with significant inflation and shortages of food, medicine and other basic goods.

The Political Weight Will Fall on Rouhani

The political blame for the fuel price hike will fall on Rouhani and his moderate allies who control the presidency and much of parliament. With parliamentary elections approaching in February 2020, fuel prices appear to be a tailor-made issue for Iran's hard-line conservatives, who are seeking to regain the seats that they lost in 2016. Along with criticizing Rouhani for the decision, they will try to pin the blame for the poor economy on foreign influences.

Even though Rouhani and his allies likely will pay a price for the decision, he has the backing of Supreme Leader Ayatollah Ali Khamenei. He, along with the rest of Iran's leadership across the political spectrum, recognize the need for economic prudence under Khamenei's "resistance economy" strategy to weather sanctions pressure. The supreme leader has come out in support of the decision, which was ultimately made by the Supreme Council of Economic Coordination. Khameini set up that panel, jointly-chaired by Rouhani, Parliamentary Speaker Ali Larijani (a traditional conservative), and judiciary head Ebrahim Raisi (a more hard-line conservative) in June 2018, authorizing it to make extraordinary economic decisions to combat the effects of sanctions and present a united political front in the face of U.S. pressure. Nevertheless, media reports from Iran indicate that a handful of lawmakers upset with the price hike and unrest have begun to gather support to try to impeach Rouhani and dismiss Larijani.

What's Ahead for the Protests?

Protests in Iran are not uncommon, with significant bouts of unrest, such as the 2017-18 economic protests and the 2009 Green Movement protests lasting for weeks at a time. Given the broader sense of economic angst currently pervading Iran, the fuel protests could well evolve into a historically comparable episode. Because of the history of protest, the government has developed tools to manage unrest, using a combination of crackdowns by security forces and control of information. This makes it unlikely that the fuel protests will grow to the point of upending the Iranian political environment or prompting resignations from the government, which is an explicit goal of the U.S. sanctions strategy. However, the effects of the current unrest could provide a defining moment for Iranian strategic thinking, much like the 2012 "chicken crisis" and subsequent decline in the value of the rial precipitated by a round of sanctions in 2012 pushed Iran to return to negotiations with the United States soon thereafter.

The fuel protests, along with generally poor economic conditions in Iran, are making it clear that the U.S. maximum pressure sanctions strategy has created a situation for Tehran that is unsustainable in the long run. It will continue to put out feelers for negotiations with the West and entertain reentering talks with the United States in exchange for economic relief. But it wants to be able to do so on its terms and when it has leverage. It would rather not do so while President Donald Trump still occupies the White House, hoping that a successor would be more pliant and amenable in future talks.

In the meantime, Iran will continue to take action, however unpopular, to keep the economy afloat and crack down on opposition to its austerity measures. It will use the gradual ramping up of its nuclear program both as leverage in future talks and to raise the cost for the United States if the White House does not grant some financial relief in the short term. Iran could also opt to resume its aggressive campaign targeting oil exports and other regional targets, particularly if the hard-line parliamentary candidates perform well in elections. Nevertheless, Iran will continue to do whatever it can to keep its economy afloat as it waits to see whether Trump will return to office after U.S. elections in November 2020.

Iran Scrambles To Manage the Fallout of a Fuel Price Hike is republished with the permission of Stratfor Worldview, a geopolitical intelligence and advisory firm.