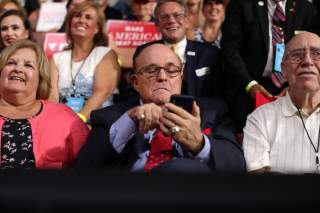 After telling CNN’s Chris Cuomo on Thursday that he asked Ukraine to look into Biden, Trump’s personal lawyer went after Biden for multiple alleged offenses related to Ukraine. He tweeted Monday that Ukraine paid Hunter $3 million in laundered money while his father and Obama looked the other way.

Giuliani told Fox Business anchor Maria Bartiromo on Monday that he would continue to unearth evidence against the Bidens.

Trump’s personal attorney added that the situation is a positive for Trump because it puts the spotlight on Biden.

“It’s the only way you can get this out,” Giuliani said. “The only way that they [the media] would cover this story is by punching the president in the face, and then the president deflects the punch — which he’s done — the story’s come way down from where it was, and then he hits ’em with a right hand that’s more powerful.”

During the conversation about Biden’s alleged conversations with Ukraine, Giuliani took a hit at Hunter, saying he is “drug challenged,” adding in that Joe Biden “fails at everything.” Hunter has struggled with drug and alcohol addiction throughout his life, according to an interview published in The New Yorker in July.