Giuliani to Reporter: I'm a 'Hero,' Critics are 'Morons' 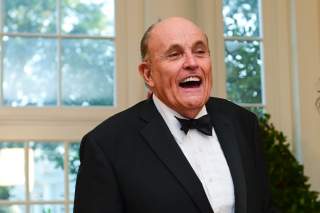 Former New York City Mayor Rudy Giuliani vented his frustration Thursday at how reporters are framing his work in Ukraine.

Giuliani told The Atlantic that his critics will eventually consider him a hero when all the dust surrounding his work in Ukraine settles. He is under fire after a whistleblower claimed the president recruited him to help urge Ukraine’s president to investigate a potential rival.

“It is impossible that the whistleblower is a hero and I’m not. And I will be the hero! These morons—when this is over, I will be the hero,” Giuliani told The Atlantic. “I’m not acting as a lawyer. I’m acting as someone who has devoted most of his life to straightening out government … Anything I did should be praised.”

Giuliani had other complaints as well.

“The State Department is concerned about my activities? I gotta believe [the whistle-blower] is totally out of the loop, or just a liar,” he said, referring to what he believes are ungrateful State Department officials who supposedly asked for his help. This is not the first time he’s reeled off a ran on the subject.

Giuliani insisted in a Twitter thread Monday that it’s former Vice President Joe Biden’s activities in Ukraine that deserve attention, not a July phone call President Donald Trump made to his Ukrainian counterpart. He claimed Biden gave money to Ukraine that enabled his son, Hunter, to make millions from his business interests there.

Burisma Holdings, one of Ukraine’s largest private gas company, gave Hunter a seat on its board of directors in April 2014.

Biden announced Tuesday he will call for impeachment if Trump fails to comply with investigations by House Democrats, according to a campaign aide.

The White House released the unredacted transcript of his conversation with Ukraine’s president after Democrats pushed for impeachment, saying he threatened to withhold aid until the country launched a probe into the former vice president.