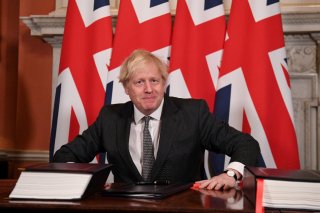 After several months of difficult negotiations, observers on both sides of the channel could finally breathe a sigh of relief when on December 24, 2020, the European Union and the United Kingdom managed to avoid a “hard Brexit” scenario and associated tariffs.

Nonetheless, the new EU-UK trade and cooperation agreement ultimately makes trading goods and services between the two parties more difficult, as well as poses a threat of reimposing tariffs if the latter diverges too far from the former’s rules. On the other hand, there is a high probability of a scenario where a future British government may attempt to renegotiate the agreement, or even reject it everything altogether. Hence, the said trade deal is by no means the end of the story—especially where financial services are concerned.

What seems to matter the most for Britain at the current moment is the sense of regained sovereignty and ability to shape its new global (trade) future according to its own will.

In the current circumstances, it is understandably vital for Westminster to ensure that the UK’s trade relationships remain at least as lucrative as it was back in 2018, where “49% of its trade was with the EU, 11% with countries that are parties to EU FTAs [Free Trade Agreements] and 40% with the rest of the world,” as Allan & Overy’s publication Back to the future? The UK’s free trade agreements after Brexit suggests.

With the UK sending $469.2 billion dollars’ worth of goods across the globe back in 2019, over 50 percent of the country’s exports by value were delivered to European countries and 23.2 percent were sold to Asian importers. Respectively, 17.3 percent worth of goods were shipped to North American importers.

Starting to negotiate new trade agreements even prior to the legal withdrawal from the EU, London managed to secure over sixty deals, which cover £885 billion ($1.20 trillion)
of the country’s trade.

What is particularly interesting about deals signed with Japan (worth £31.6 billion in 2019), Singapore (worth $224.8 billion (£17billion)), and Vietnam (worth $6.7 billion in 2019) being one of the world’s fastest-growing emerging markets is that it predominantly serves “further strengthening the UK’s involvement in the [Asia] region and ultimately as a springboard for joining the Trans-Pacific Partnership trade agreement,” as Pinsent Masonstrade expert Dr. Totis Kotsonis argues.

“With Singapore and Vietnam both members of ASEAN, UK is also keen to use these agreements to strengthen its ties with the Southeast Asian trade block, becoming an ASEAN 'dialogue partner' in due course,” Kotsonis concludes.

In order to be able to join the Comprehensive and Progressive Agreement for Trans-Pacific Partnership (CPTPP), which reduces tariffs on 95 percent of goods between its members and creates rules in a number of areas including on digital trade, data, financial, professional, and business services, the UK would require the approval of all eleven country members. Alongside Mexico, which secured a deal with London worth £5 billion annually, Britain’s allies such as Australia, Canada, and New Zealand (including the United States) are the countries crucial to its plans to pivot to the Asia Pacific region as a tool to diversify its trade, and ensure that it is “less vulnerable to political and economic shocks in certain parts of the world,” as stated by the UK’s Secretary of State for International Trade, Liz Truss.

On the other hand, each agreement between the UK and Australia, New Zealand, and the United States will have to be bespoke as the UK was not a party to an FTA with these countries through its former membership of the EU. A task in itself that will prove monumentally difficult and possible take years before it can be concluded.

As the United States is concerned, Brexiteers view a free trade deal with Washington as the cherry on top after splitting from Brussels, and many had anticipated closing a deal before the U.S. presidential election in November last year which did not happen.

Although trade between the two countries reached an all-time high of more than $140 billion in 2019 and has been growing steadily for the past two years, the new occupant of the White House, Joe Biden, does not seem to treat it as a priority—even though there will no longer be any opportunity to fast track a deal through Congress if the current TPA runs out in July 2021.

The reason for this may be the fact that the new administration in Washington seems to be much more concerned about its relationship with its largest overall trading partner, the EU, as Lord Kim Darroch argues.

“There are two much bigger trade deals that he [Joe Biden] could potentially do, rather than a deal with a medium-sized country of 65 million people,” the former UK ambassador to the United States said at BBC Radio 4’s Westminster Hour on January 17, 2021.

“One is he could resume the talks that never finished in Obama’s time on an EU-US free trade deal and the other is that he could take America into the trans-Pacific partnership,
which is potentially a huge advantage for America and would start to counter Chinese influence in that region,” Lord Darochadded.

Therefore, it should not come as a surprise that No.10 has begun to portray itself in stark contrast to the EU, which recently managed to sign an investment deal with Beijing, when it comes to “handling” China.

In his statement welcoming the inauguration of Joe Biden, Boris Johnson declared the following: “In our fight against COVID and across climate change, defence, security and in promoting and defending democracy, our goals are the same and our nations will work hand in hand to achieve them.”

With both leaders meeting for the first time at the G7 summit in June, which the UK is hosting, and later at the COP26 UN climate change conference in November taking place in Glasgow, there is a high probability that Global Britain will come up with more defined vision for its future, where staying in opposition to China will be the key element of its perceived success.

Adriel Kasonta is a London-based foreign affairs analyst and commentator, and founder of AK Consultancy. He is former chairman of the International Affairs Committee at the oldest conservative think tank in the UK, Bow Group. You can follow him on Twitter @Adriel_Kasonta.