Global Prosperity Killer: Brexit Could Spell the End of Globalization 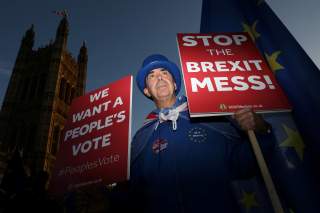 The U.K. House of Commons has finally voted for Brexit. If the plan passes the House of Lords without much delay, the U.K. will leave the European Union several years after a 2016 referendum set it down this path.

More than merely tossing aside the EU, this vote represents a rejection of globalization and the implicit trade-off of some democratic control over economic policy for prosperity. It’s an exchange that more citizens across the world, including the United States, are unwilling to make – often believing they can earn the same gains without a loss of economic control.

As an economist, I believe this trend of turning away from the institutions that facilitated economic globalization is troubling and may lead to the unraveling of more than a half century of growing global integration – and the economic growth that came with it.

To avert that outcome, we need to answer the seemingly simple question: How can societies reap the economic benefits of globalization while maintaining democratic participation within it?

Some of my research has focused on the ways in which democratic societies set their own trade policies – that is, tariffs, quotas and other types of barriers to foreign goods and services entering their markets.

But since the creation of the General Agreement on Tariffs and Trade after World War II, countries’ ability to do this has been increasingly constrained by international accords.

At first, this primarily involved trade barriers like tariffs – U.S. President Donald Trump’s favorite weapon in his trade wars. While protests against the negative consequences of globalization are hardly new, the loss of economic control over tariffs rarely led to a country’s outright rejection of this system, primarily because the economic gains were so significant.

For example, one estimate of the effect of the EU’s single market, which eliminated virtually all trade barriers within the union, is that it has raised members’ GDP by 8% to 9% – which translates to an average of about US$3,000 for every man, woman and child.

Beyond Europe, globalization has brought significant gains to billions of people, including by helping cut the number of people living in extreme poverty from 1.9 billion in 1990 to around 730 million in 2015. That’s a drop from 36% of the world’s population to less than 10%.

But tariffs and quotas aren’t the only barriers to trade.

Countries across the world all have their own regulatory standards, quality certifications and other rules they require companies to follow. Known as technical barriers to trade, they can be just as bad for trade as traditional tariffs. And for global businesses, adhering to all these different rules can be costly.

The EU, for example, has created a large set of harmonized standards and regulations that countries must follow in order to participate in the single market, one of the issues motivating U.K. voters who chose to leave. A famous case in which the EU eventually backed down after a U.K. backlash involved Brussels trying to enforce metric measurements, which would have endangered Britons’ beloved pints and miles.

In the U.S., the Trans-Pacific Partnership, negotiated by the Obama administration but shelved by Trump in 2017, delved deeply into these issues. A big part of the opposition to the agreement arose from the delegation of these sensitive issues to often secretive international negotiations.

This trade-off – between the economic gains of global trade and the desire for local control over a country’s economy and markets – is what Harvard economist Dani Rodrik called “The Globalization Paradox.”

I would argue that the third option offers the best answer to the question, “How can we keep globalization’s gains without ceding all control?”

The EU is one of the most ambitious attempts to follow the third path – and gave countries big and small equal say in much of its implementation. Its governing bodies consist of directly elected members and representatives of the member states’ democratically elected governments.

However, even this shared authority can cause problems, as evidenced by Brexit. Even if the EU is organized democratically, it does not necessarily follow that the citizens of the member states will feel much attachment to its decisions. This sentiment is doubly true in a country like the U.K., which has traditionally regarded itself as separate from continental Europe.

But policymakers and trade negotiators would be wise to take account of voters’ concerns about a loss of control and be cautious about moving beyond preventing traditional trade barriers like tariffs and quotas from being erected.

The biggest risk we all face today is that Trump’s trade wars, Brexit and other newly erected trade barriers become permanent and undo many of the gains the world has made since World War II. We’ll all be the poorer for it.