Globalization Was Wrong: Why the Nation-State Never Left Us 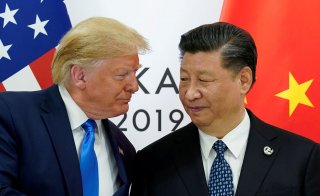 The People’s Republic of China had been arguing that its mission is to “save globalization” from “populist and nationalist anti-globalization sentiment.” In early March, Global Times, a media outlet of the ruling Communist Party of China, warned that “it cannot be ignored that the risks might turn into a geopolitical challenge” if the West turns away from its concept of globalization.

The term globalization became popular in the 1990’s during the post-Cold War euphoria that spawned hopes of a new era of peace and harmony. The core of this alternative belief system was that private entities, individuals, non-government organizations and corporations, could run the world better than nation-states. The necessary evil of government in world affairs was national security; but in the post-war environment this was no longer an imperative. The Cold War restrictions on trade and other forms of interaction across borders could be dropped because the exchange of goods, capital, and technology would not be used to create weapons in a peaceful milieu.

Yet, these sentiments were not new. They were rooted in the school of classical liberalism which had also gained influence in another post-war era nearly two centuries earlier at the end of the decades-long conflicts of the French Revolution and Napoleon. Free Trade, which would come to include not just the movement of goods across borders, but also capital and people, was central to the classical liberal school. It was hoped that these transnational relations would weaken local allegiances and create a global community.

The most famous advocate was British Radical Richard Cobden who claimed in 1842 that commerce was “the grand panacea” and that under its influence “the motive for large and mighty empires, for gigantic armies and great fleets would die away.” Cobden was a “Little Englander,” who hoped that Free Trade would destroy the British Empire. He wrote in 1835 that under his system the colonies “must be placed in the same predicament as if they were not part of His Majesty’s dominions. When, then, will be the semblance of a plea for putting ourselves to the expense of governing and defending such countries?” His program would do the same for people and firms in the United Kingdom, generating forces that would pull the home islands apart as well.

The French economist Frederic Bastiat argued that “Free trade means harmony of interests and peace between nations” and that “we place this indirect and social effect a thousand times above the direct or purely economic effect.” He proclaimed in 1849, “I shall not hesitate to vote for disarmament because I do not believe in invasions.” An odd outlook for someone who lived in France.

The textbook economic theory that evolved from this classical era holds this is the way to maximize global output. Each region produces what it can do best in a global division of labor. Entrepreneurs are the best managers and innovators. Capital will flow to where it is most needed as measured by its rate of return. Yet, the world is not a single polity where the term “global” can be substituted for “international” as has been attempted. Where factories, research labs, shipyards, skilled workers and other strategic assets reside are the material foundations of the international balance of power. Governments cannot sit idle as these are placed across the map based on private profit rather than on the needs of national development and security. Trade theory cannot be plucked out of its larger ideological context for policy making.

Classical liberal thought following the fall of the Berlin Wall was so persuasive that even national leaders surrendered to it. Consider the creation of the World Trade Organization in 1995. The WTO lists as its first principle “A country should not discriminate between its trading partners and it should not discriminate between its own and foreign products, services or nationals.” This essentially removed the nation-state from the world economy. Who can support leaders who have declared they would not favor their constituents, their countrymen, over foreign rivals? A stark rejection of the social contract meant by globalists to dissolve the mutual loyalty between citizens and their nation-states.

For three decades, the appeasement of Beijing has been carried out primarily through lopsided trade which has transferred production capacity, technology, capital, management and engineering expertise across the Pacific on an unprecedented scale. To the public, outsourcing jobs to China was the fault of greedy transnational corporations willing to deal with anyone in the pursuit of profit. And the politicians who allowed America’s industrial heartland to become a “rust-belt” were simply on the take. What cannot be overlooked, however, is that these actions were given moral cover by intellectuals who assured them that they were fulfilling a higher purpose by spreading liberal values and promoting peace by redeploying assets overseas.

The aim was “interdependence” as promoted by a bevy of scholars led by Robert O. Keohane whose Power and Interdependence (written with Joseph S. Nye) became a standard textbook anticipating globalization even as the Cold War was still raging. His theme was the transfer of influence from nation-states to non-state actors. He rejected the Realist hierarchy of interests that placed national security above business and social issues. Private entanglements and divided loyalties would make it impossible for any country to act in its own interest, or even have a united interest to act upon.

The theory of interdependence had not been forgotten between Cobden and Keohane. In 1910 Norman Angell published his best-selling The Great Illusion to protest the British-German naval arms race. He argued trade and global finance had so entangled the major economies that war was impossible. He was proven wrong in 1914, but one grand failure was not enough. Angell was awarded the Nobel Peace Prize in 1933—the same year Adolf Hitler became Chancellor of Germany. In 1938, a special edition of The Great Illusion was released coinciding with the infamous Munich conference. A year later, encouraged by appeasement, Hitler invaded Poland triggering World War II.

Today, interdependence is being used by China not to promote peace but to gain leverage. The COVID-19 pandemic has brought to public attention the vulnerability of the U.S. economy to Chinese influence. Rosemary Gibson, lead author of China Rx: Exposing the Risks of America’s Dependence on China for Medicine, summed up one key problem in an interview, “Millions of Americans are taking prescription drugs made in China and don’t know it, and neither do their doctors…. That happened after the U.S. opened up free trade with China…. Now, we’re hugely dependent on China for penicillin and other antibiotics including those for superbugs.”

Beijing thinks its hold on international supply-chains is unbreakable. An essay in the state-run China Daily proclaimed on April 14, “Global Reliance on China Won’t Reduce.” It asserted, “Even if more regionalized and diversified supply chains would reduce risks, China retains considerable competitive advantages in many areas, such as electronics and machinery and equipment manufacturing.” New “investments will help China build on recent progress in even more high-tech sectors, including big data, artificial intelligence, the internet of things, and the industrial internet. Which in turn will deepen China’s integration into the global technological supply chain. And not even a Sino-American decoupling can stop technological exchanges between China and the rest of the world.” The interdependence that intellectuals urged political and business leaders to pursue has backfired, creating a more powerful and aggressive China, not peace in our time. To Beijing, “globalization” means the conduct of its national strategy on a global scale, not dissolution.

The Secretary of Defense’s annual report to Congress on The Military and Security Developments Involving the People’s Republic of China 2019 lays out the economic component of Beijing’s “comprehensive national strategy.” It states, “China has mobilized vast resources in support of defense modernization, including “Made in China 2025” and other industrial development plans, as well as espionage activities to acquire sensitive, dual-use, or military-grade equipment.” Key to this mobilization is the effort “to align civil and defense technology development to achieve greater efficiency, innovation, and growth.” International projects like the One Belt, One Road Initiative will give Beijing control over more productive assets. The Global Times column mentioned at the start of this essay states, “The U.S. wants to reconstruct its manufacturing capability or diversify supply channels outside China, and China needs to speed up to make breakthroughs in some key technologies. The country that moves faster will gain the initiative.” That is a true Realist perspective to which the United States must respond in kind.

There was nothing new in the sophistry of globalization including its imminent demise. Once again, its brief moment of glory was upended by events in a dynamic and divided world where wealth and power are up for grabs and security cannot be taken for granted. It has sadly taken over two decades to complete the thought cycle by recalling one of the core lessons of history: all post-war eras become interwar periods.