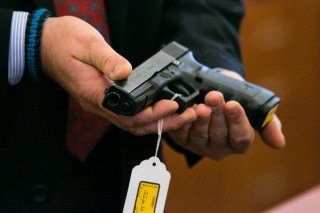 Over the years, the .45 Automatic Colt Pistol (ACP) cartridge has grown on me a little bit. When I was first learning about firearms some of the younger guys would call the .45 a “fudd round.” I’ll admit, there sure are a lot of older guys that carry around 45, but there’s definitely a good reason behind all of that. Stopping power is the name of the game when it comes to .45. Who wouldn’t want that in a Glock?

The G21 is a Glock take on 45 ACP. Is it any good or just another pistol not worth the mention?

The G21 is a pretty hefty gun. It features all the Glock design mainstays and should be familiar to anyone that has ever handled a Glock. The only issue is that this thing is fat. It’s just a big gun and it makes readjusting the grip every couple of shots a necessity. The 21SF remedied this when it came out, but the base version can be just a tad unwieldy. Other than that this is a normal Glock with that ever-controversial grip angle. I’m fine with it, some people aren’t.

The trigger is serviceable and identical to every other Glock around. No surprise there. I haven’t historically been a fan of stock Glock triggers, but they work all the same and I’m tired of spending money on fancy triggers.

Now I primarily used this gun as a nightstand weapon. It’s a bit too bulky to carry concealed so I just kept around the house, but I could see it being open-carried around a farmer or while hunting. While I did use the G21 as a nightstand gun, it wasn’t my first pick. I go to my rifle or shotgun when I hear a bump in the night. Still, it was nice to have a beefy weapon to fall back on in a worst-case scenario.

People always expect the recoil of a .45 to be heavy, but with the Glock 21, that’s not really the case at all. It’s a remarkably soft-shooting pistol as far as 45 goes. Felt recoil is more akin to a slow push as opposed to the more acute snap of 9mm. It’s an easy gun to shoot and was a lot of fun all around.

You’ll also be working with eleven rounds in the mag plus one in the chamber, not bad at all for a little .45 action. My regular carry gun holds that much.

The Glock 21 is just a well-rounded .45. The only thing I would change is the frame, but Glock has already addressed that very issue. I don’t currently have a practical use for the G21 at the moment but I can for sure see it being used by LEO’s and people who like to open carry. Personally, though it’s just not quite for me as far as utility. But it’s still a helluva lot of fun to shoot.