The Glock 48: Could This Be the Best Gun Glock Ever Made? 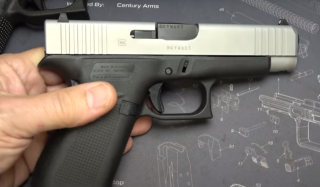 One of the most popular handguns in the world, the Glock 19, recently got an upgrade of sorts with the introduction of a similar, single stack magazine model. The Glock 48 is dimensionally very similar to the older 19 with one key difference: it is notably narrower, allowing it to be carried concealed with less visibility.

In the mid-1980s, Austrian gunmaker Glock introduced its Glock 17 to the U.S. market. A polymer framed, high-capacity nine-millimeter handgun, the Glock 17 took America by storm, providing incredibly popular in a market generally marked by low innovation. The striker fired operating system, utterly reliable, was fed by a large seventeen-round magazine. The magazine was considerably larger than many U.S. guns, a feat achieved by staggering bullets in two columns. This packed more bullets into a magazine without increasing overall length.

The staggered magazine had a cost, however—a wider magazine—and thus wider pistol than what would have been achieved with a single column. The compact Glock 19 introduced in 1988, is considered by many to be the “ideal” Glock in terms of size, weight, and magazine capacity. A Glock 19 pistol loaded with fifteen nine-millimeter rounds has an overall width of 1.34 inches. By comparison, a 1911A1 handgun loaded with eight wide .45 ACP rounds in a single column is typically just 1.04 inches wide.

In 2019 at the SHOT Show in Las Vegas, Glock introduced what was essentially a single column Glock 19. The Glock 48 has the same overall length as the Glock 19—7.85 inches, with a slightly longer 4.17 inch barrel. At 1.1 inches however Glock 48 is a quarter inch thinner than the Glock 19. The company states that the narrowness results in “increased concealability and high carrying comfort”—meaning a narrower pistol is less likely to get in the user’s way when carried high on the waist.

Like all other Glock handguns the Glock 48 has a polymer frame and metal slide. The Glock 48 sports a two tone finish, with a black polymer frame complemented by a steel, silver-colored slide treated with nPVD (physical vapor deposition) to prevent corrosion, resist marring by chemicals, and stand up to the weather and elements.

The Glock 19 and Glock 48 are equally lethal, both chambered in nine-millimeter parabellum, though the Glock 48 carries just ten rounds to the Glock 15. Like anything else the push to bring a narrower pistol to market involved making tradeoffs. Whether that tradeoff is acceptable to a gun owner or whether the increased ammunition capacity of a Glock 19 is more desirable is up to the individual. For those that consider the Glock 19 to be the ideal Austrian autoloader but a bit too wide for their liking, the Glock 48 is a tempting alternative.