Glock 7: The Gun You Have Nothing to Fear From (But Glock Hates It) 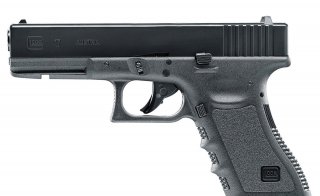 It was 20 years ago this coming summer that the action movie Die Hard 2 – which was actually based on the Robert Thorp crime novel Nothing Lasts Forever, a sequel to The Detective – introduced some of the worst myths and misconceptions about the Glock handguns.

According to John McClane, who was played by Bruce Willis but could have been played by Frank Sinatra, who starred in the film version of The Detective; the "Glock 7" was a porcelain gun made in Germany. It doesn't show up on airport X-ray machines and it would cost more than what the Washington D.C. Airport's chief of security makes in a month.

The handgun seen carried by the U.S. soldiers-turned-rogue-operatives is, in fact, a real Glock 17, and this was one of the earliest appearances of the now-famous handgun in a major film – it had made its debut in the Mickey Rourke film Johnny Handsome a year earlier.

There is no such thing as a Glock 7 handgun and there never has been. This is because Gaston Glock, who founded the company that bears his name, was a prolific inventor and the handgun was his 17th patent filing, but apparently not his actual patent. To date, there is no confirmation on what the seventh patent may have been but it certainly wasn't for a handgun.

Now the character of McClane was a New York Police Officer who transferred to the LAPD and while he was good at taking down skilled thieves and terrorists, it is reasonable to accept that he might not have known much about the Glock handgun, which had only been introduced in the early 1980s.

However, if the rest of the facts just seem made up – that's because they were.

As for being German, that's just wrong. Glock Ges.m.b.H. is an Austrian company, headquartered in Deutsch-Wagram, Austria, so perhaps the name of the town threw off McClane or at least the film's screenwriters.

More importantly, no Glock has ever been made of porcelain (a material not even ideal for firearms) or ceramic, and nearly 84 percent of the handgun's weight is actually in its steel including the barrel and slide; while the "plastic" parts are actually "Polymer 2," and most certainly would show up on airport scanners.

None of this even accounts for the fact that even if the guns were porcelain or ceramic, the ammunition would most certainly set off the X-ray machine! However, this was really a case of the film needing the firearms to get through the X-ray machines as it was crucial to the plot.

Films require a certain level of what is called "suspension of disbelief" and this is certainly the case with the Glock 7 in the movie. The film's armorer Mike Papac, whose company Cinema Weaponry supplied the firearms used in film has said, "I remember when we did that scene, I tried to talk them out of it. There's no such thing as a gun invisible to metal detectors, and there shouldn't be, but they wouldn't budge. They had it written into the script and that was that."

Even before the movie had come out, which only reinforced the myths that such invisible to x-ray machine weapons existed, there had been calls to ban the Glock and similar firearms. Warnings came from The Washington Post in January 1986 that Libyan agents were trying covert methods to obtain the weapons, which the paper of record warned could bypass x-ray machines. It actually took testimony from Phillip McGuire on behalf of the Bureau of Alcohol, Tobacco and Firearms (ATF) to Congress to set the record straight – and it is worth noting this was the same McGuire who went on to lead Handgun Control, Inc.

One point from Die Hard 2 that either Papac or no one else brought up was the cost cited – a basic Glock at the time was only around $400 to $600. One can only hope that the head of security at a Washington, D.C. airport would have been paid more than that each month.