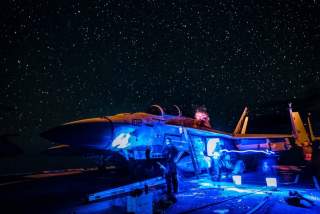 Taken on Sep. 7, 2016 the cool photo in this post shows an F/A-18 Super Hornet belonging to Strike Fighter Squadron (VFA) 102 “Diamondbacks” receiving a fresh water wash-down under a breathtaking starry sky on the flight deck of the USS Ronald Reagan (CVN 76) from the sailors assigned to the squadron.

To make this image even more spectacular is the streak of light across the photo left by a sailor with a personal flashlight as the camera shutter remained open in low light.

Noteworthy the Diamondbacks of VFA-102 are the Navy’s only forward-deployed F/A-18F Super Hornet squadron. The squadron is attached to Carrier Air Wing (CVW) 5, based out of Naval Air Facility Atsugi (NAFA), Japan.

The unit regularly embarks aboard Ronald Reagan, the Carrier Strike Group Five (CSG 5) flagship, in support of security and stability in the Indo-Asia-Pacific region.