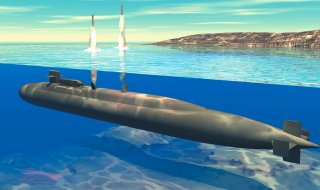 The U.S. Navy is firming up plans for new, large cruise-missile submarines to replace the four aging Ohio-class SSGNs.

The sailing branch is also working on a new missile for these boats. The combination of new submarines and missiles could help the Navy to restore its overall firepower potential after older subs have decommissioned.

American submarines began carrying Tomahawk cruise missiles as early as 1984. Today all 56 of the Navy's attack and cruise-missile submarines are compatible with the Tomahawk and together account for around a quarter of the nearly 6,000 launch tubes on U.S. warships that are capable of launching Tomahawks.

The reactor cores aboard 1980s-vintage Los Angeles- and Ohio-class submarines begin to wear out in the 2020s, forcing the Navy to decommissions large numbers of submarines over a short period of time. The SSN and SSGN force could decline to as few as 42 boats in 2028 -- a 14-boat decline compared to 2018.

The sailing branch projects that its overall missile capacity will suffer a commiserate decline -- to a low of around 5,500 in the late 2020s. The new SSGNs could begin to restore the Navy's firepower when they begin entering service in 2043. The 2019 edition of the Navy's 30-year shipbuilding plan anticipates acquiring five of these "large-payload submarines" by 2048 at a cost of at least $7 billion per vessel in current dollars.

Newport News shipyard in Virginia would build the new SSGNs on the same production line that is building Columbia-class ballistic-missile submarines to replace the fleet's 14 Ohio-class boomers in the 2020s and 2030s.

"What we are going to do is we’re going to keep the Columbia line hot,” Rear Adm. John Tammen, the Navy's director for submarine warfare, reportedly said at the Naval Submarine League’s annual symposium in early November 2018.

Basing SSGNs on the Columbia class could result in a small reduction in each vessel's missile capacity. The current SSGNs replace 22 of the Ohio's 24 ballistic-missile tubes with so-called "Multiple-All-Up-Round Canisters," each containing seven launchers for Tomahawks. The other two tubes function as lock-out chambers for divers.

But the Columbia class features only 16 missile tubes. If the Columbia SSGNs leave two tubes for divers, only 14 would pack launchers for a potential load of 98 cruise missiles per boat, down from 154 in today's SSGNs. The cruise-missile submarine USS Florida alone launched more than 90 Tomahawks in the early hours of the NATO air campaign over Libya in 2011.

The per-ship reduction in missile launchers could explain why the Navy wants five large-payload submarines to replace four Ohio SSGNs.

The new SSGNs could carry new missiles in addition to Tomahawks. Speaking at the Naval Submarine League's symposium, Rear Adm. John Tammen -- the director of undersea warfare on the chief of naval operations’ staff -- said the Navy is studying a next-generation land-attack weapon to complement the Tomahawk, the basic design of which will be nearly 70 years old when the first new SSGNs enter service under current plans.

Tammen said the fleet is also studying options for a "payload handling system" that could launch undersea drones from missile tubes. The current SSGNs launch drones from the same lockout chambers the divers use.

"The SSGN plays a key role in global undersea war-fighting," Vice Adm. John Richardson, then the commander, submarine forces, said of Florida's 2011 mass missile-launch. "By virtue of their concealment and endurance, the SSGN platform forces our adversaries to consider that they could be operating almost anywhere at any time."

The Navy anticipates giving up this capability for more than a decade after the current cruise-missile boats decommission in the 2020 and 2030s. But if plans hold, a decade later the new SSGNs could restore the missing firepower.

Why the Seawolf Is America's Most Secret of All Stealth Submarines