Goodbye F-15s, Hello F-16 Vipers: The Air National Guard Is Getting an Upgrade 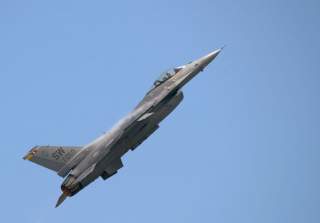 However replacing the F-15C/Ds with some upgraded F-16s could not be a wise decision.

As reported by AirforceTimes, lawmakers at a House Armed Services readiness subcommittee hearing on Mar. 22, 2017 were told by Lt. Gen. Scott Rice, director of the Air National Guard (ANG), about plans to retire its 236 F-15C/Ds to save costs.

He added that the service plans to replace those retired aircraft with upgraded F-16s.

Maj. Gen. Scott West, the Air Force’s director of current operations and deputy chief of staff for operations, explained that retiring the Light Gray (as the F-15C/D fighter is dubbed by its aircrews) Eagles would maximize the use of the U.S. Air Force (USAF) limited resources and minimize the kind of air assets the branch would use to perform its mission.

Nothing has been said about a possible retirement of the F-15E Strike Eagle fighter bombers.

Currently the proposal plan to retire the aircraft calls for the F-15s phase out in 2020.

However replacing the F-15C/Ds with some upgraded F-16s could not be a wise decision.

The F-15C/D Eagle in fact is an all-weather, tactical fighter specifically designed to permit the Air Force to gain and maintain air supremacy over the battlefield. To perform this mission the aircraft can carry a variety of air-to-air weapons: four AIM-120 advanced medium range air-to-air missiles (AMRAAM) on its lower fuselage corners, four AIM-9L/M/X Sidewinder or AIM-120 missiles on two pylons under the wings, and an internal 20mm Gatling gun in the right wing root.

In fact later in the hearing, Rep. Martha McSally, a former A-10 pilot, questioned the move as the F-16 does not have the same air-to-air capabilities as the F-15.

Moreover, since USAF is already facing a pilot shortage, she expressed her concern about what such a shift would do to aircraft readiness.

“We’re already in a readiness crisis,” McSally pointed out. “If you’re now retraining everybody to another aircraft, in the midst of a crisis, that does have a bit of a short-term dip in readiness as well. With us being down to 55 fighter squadrons, we’ve just got to be careful on how that transition would happen, should this decision come to fruition.”

But Rice doesn’t seem too concerned about the potential negative effect that replacing the F-15 Eagle with the F-16 would have on air superiority.

“There’s a risk in changing any of our force structure decisions,” Rice said. But, he added, “there are capabilities we can add and provide on the F-16 that will [fill] a gap as we go into the future. Overall, our readiness and our protection of the U.S. will change, but I think overall, we will be OK.”