Goodbye Tanks, Hello Drones: How the Marine Corps Will Fight Beyond 2030 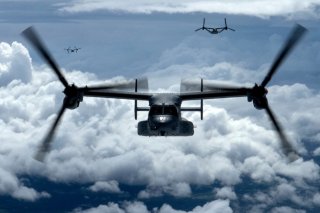 The United States Marine Corps’ Force Design 2030 strategy outlines the service’s need for a lighter, smaller, faster, yet better networked and more lethal sea-land attack force, a shift which is leading the service to divest its tanks, decrease its infantry, and increase its reconnaissance and mobile anti-armor weapons and reduce the size of its aviation component. The document calls for the Corps to divest three of its heavy-lift helicopter squadrons, two light attack helicopter squadrons, and three medium tiltrotor squadrons. By contrast, it calls for a decided increase in unmanned systems for the force by operating six active component drone squadrons.

The transition reveals a clear Marine Corps shift toward the use of air and surface drones to decrease risk by reducing manned platforms and increasing the range and capacity for multi-domain networking.

“As a ‘stand-in’ force of the future, the Marine Corps requires a family of [Unamnned Aerial Systems] UAS capabilities. We need to transition from our current UAS platforms to capabilities that can operate from ship, from shore, and be able to employ both collection and lethal payloads. These future capabilities must be expeditionary and fully compatible with Navy platforms and command and control networks,” Marine Corps commandant Gen. David Berger wrote in the Marine Corps Force Design 2030 Document.

The Corps paper specifies a number of key drone platforms intended to extend reach and lethality across multiple domains in real-time in support of an expeditionary posture. Referring to a small group of “hunter drones” as T-UAS (Tactical UAS), the Corps text identifies short, medium, and long-endurance drones to support infantry battalions on the move in combat. They are the handheld Puma drone along with Black Hornet, Skydio, and Stalker. These unmanned systems enable precision attack while allowing dismounted units to disaggregate yet remain networked for coordinated attack. With forward nodes such as hand-launched drones, Marine Corps infantry can achieve a desired battlefield effect with a smaller, yet more lethal overall force. Added to this, the addition of networked drones is also intended to support rapid amphibious maneuvers such as quick sea-to-land attack operations for force repositioning.

Heavy armor is very difficult to quickly move from land to sea and back again, whereas lighter, faster units empowered by drone surveillance and precision weaponry might be positioned to move from ship to shore and back as needed in fast-evolving amphibious warfare operations.

Relying more heavily on drones and unmanned systems can decrease the need for heavier manned platforms such as tiltrotors and heavy-lift helicopters. This can also help decrease a logistics footprint and lessen any “signature” potentially detected by an enemy force. It could also better facilitate high-speed multi-domain connectivity and transition. The strategy seeks to help the Corps move toward a “meshed,” interconnected series of air-land-sea combat nodes able to share real-time information and decrease sensor-to-shooter time. This approach makes a lot of sense if viewed in the context of an island-hopping kind of operation in the Indo-Pacific, and represents the Marine Corps’ shift back toward its maritime roots in preparation for amphibious operations and maritime warfare.