Gordon Chang: Why a Chinese Invasion of Taiwan Would Be a Massive Mistake 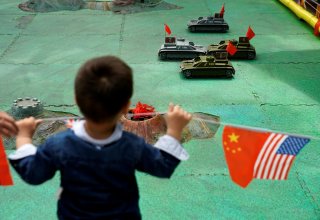 “In an extreme situation, every country has a right to shoot first,” said Shen Dingli of Shanghai’s Fudan University to the New York Times.

Beijing looks like it is once again organizing its house academics to threaten the people of Taiwan, this time to intimidate the United States into not aiding the endangered island republic. Shen preceded his menacing words with a warning to Taiwan’s president. “The United States,” he said, “unfortunately may mislead Tsai Ing-wen to misjudge the strategic situation.”

This month, Beijing has been busy issuing “red lines” and “bottom lines” to America, much like it did in May of last year. Then, in addition to declaring a “people’s war” on the United States, it publicized a phrase it had used in the past before employing force.

Americans have been warned, and they should be concerned. As the late American ambassador to Beijing James Lilley was fond of saying, “The Chinese telegraph their punches.”

Almost every policymaker and analyst tells us that Taiwan is the one red line Beijing will act on because it believes the island is an “inalienable” part of China.

Americans, from Nixon and Kissinger, have been far too deferential to China’s view that Taiwan is its 34th province. Even though Taiwan’s formal name is the Republic of China, people there by and large do not self-identify as “Chinese.” In a recent survey, 83.2 percent saw themselves as “Taiwanese only” and 5.3 percent said they were “Chinese only.” The remainder answered “both.”

Taiwan, in fact, has never been formally recognized by the international community as a part of a Chinese state. It was a part of the Qing empire, but the Chinese considered the Qing rulers foreign, and post-World War II arrangements never technically ceded the island to Chiang Kai-shek’s regime.

Nonetheless, most countries have accepted China’s position on Taiwan, and that has led Beijing to demand more. In addition to existing claims to the “blue national soil” of the South China Sea, to Japan’s Senkaku Islands in the East China Sea, and to large chunks of northern India, Chinese rulers are now eyeing an additional slice of Tajikistan, Vladivostok and a large portion of the Russian Far East, and Okinawa and the rest of Japan’s Ryukyu Islands.

To prevent more territory from becoming “core,” nations are pushing back. This month, for instance, Secretary of State Mike Pompeo, when asked by Nikkei Asia whether the United States would defend Taiwan if China “unilaterally” attacked, hinted America would come to the aid of the island.

“Our military has been very active in the region, ensuring that we have a presence so that we can ensure that there is, in fact, a capacity for a free and open Indo-Pacific,” he said. “These are the kind of things one does, whether it’s Taiwan or the challenge presented to Japan, the United States will be a good partner for security in every dimension.”

That is not the we-will-defend-Taiwan declaration that many hope for, but Washington’s public messaging is getting clearer.

Up to now, the U.S. has maintained a policy of “strategic ambiguity.” In other words, Washington does not tell either China or Taiwan what it would do in the case of likely conflict. The rationale is that America should keep Beijing guessing as to whether it will defend Taiwan and, at the same time, discourage Taiwanese from disrupting the “status quo” by declaring “independence” and thereby provoking the Chinese.

Beijing is evidently worried about Trump administration policy. The Global Times, controlled by People’s Daily, issued an article on October 12 stating the policy cannot change because that would “enrage Beijing.” “There is no doubt that Washington is clearly aware of the importance of the Chinese mainland,” the paper declared. “It will not take risks to break its ties with the Chinese mainland due to Taiwan, because the price is too high.”

Strategic ambiguity has worked until now, but the policy has been in place during a period when China, for many reasons, was in no position to invade. Xi Jinping, currently in charge, is an aggressor and may have reasons to lash out. In any event, he has amped up the threats to take Taiwan, issuing Taiwan propaganda at a torrid pace.

Japan is Taiwan’s northern neighbor. In fact, Japan’s westernmost inhabited island, Yonaguni, is actually south of Taiwan’s capital of Taipei, and Taiwan’s mountains are visible from the Japanese island on a clear day.

Tokyo, of course, is supportive, albeit quietly, of Taiwan because the defense of the Japanese homeland depends on Taiwan remaining in friendly hands. As an Asian security expert once told me, “Japan will never let China take Taiwan.”

New Delhi does not feel as strongly, but it is slowly tightening ties with Taiwan, in part because it recognizes Taiwan and China’s peripheral waters ultimately affect India’s eastern flank.

As Cleo Paskal of the Foundation for Defense of Democracies told The National Interest, ties between New Delhi and Taipei had been warming over the past few years.

The Chinese incursions into Indian territory in Ladakh this spring and the death of 20 Indian soldiers on June 15 poisoned the Indian government’s view of China. As Paskal notes, “high-profile think tankers are now openly talking about revisiting the ‘one-China policy.’ ”

Moreover, the killings have pushed India closer to the United States and Japan, both of which support Taiwan. As the so-called “Quad” members—Australia, India, Japan, and the United States—draw closer in common defense against China, Taiwan should benefit. New Delhi’s de facto representative in Taipei has served in the U.S. and has worked on Quad matters, Paskal points out.

Popular opinion in India supports a sharp move away from Beijing. A local leader of the governing Bharatiya Janata Party, for instance, hung hundreds of Taiwan National Day posters outside the Chinese embassy in New Delhi this week, prompting protests from Beijing and an outpouring of support for Taiwan from Indian citizens. India’s Ministry of External Affairs has recently been active in supporting pro-Taiwan sentiments in India.

As Fudan’s Shen warns, China is ready to “shoot first.” And as Rick Fisher of the International Assessment and Strategy Center told The National Interest, “After 30 years of military modernization and buildup, China is almost ready to execute an invasion.”

China may find out, however, that by the time Beijing is ready for war, Taiwan will have cemented relationships with powerful friends, the ones Chinese leaders fear.

Image: A boy looks at remote control tank toys next to the flags of China and the U.S. at a park in Shanghai, China, May 29, 2019. REUTERS/Aly Song.