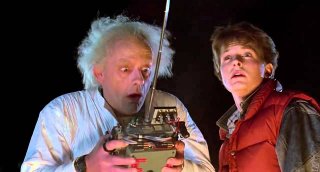 Let me stipulate up front: Time travel is science fiction, not science. When NASA says, “Humans can’t hop into a time machine and go back in time,” that’s good enough for me.

Of all the movies I’ve seen, the 2004 indie-film Primer does the best job of making time travel sound like a real thing. Still, since there is literally no real science to time travel, you have to wonder why we label such films “science fiction.”

Chalk it up to tradition. It’s been that way for a century and a quarter, ever since H.G. Wells wrote The Time Machine (1895). To be fair, we can’t blame Wells for this. Einstein didn’t deliver his special theory of relativity explaining the relationship between space and time until 1905. Ironically, Einstein’s theory was just tantalizing and confusing enough to fuel rather than squash speculation on time travel. Thus, time travel is inexplicably bound forever to the science fiction canon.

Film is a particularly powerful medium for time travel speculation because of its dominant visual dimension and its ability to introduce “special effects.” The first time travel movie was probably the silent film A Connecticut Yankee in King Arthur's Court (1921), which actually should not really count because it was based on a Mark Twain novel (1889) that had no actual time travel technology. No matter. Once Pandora had opened the box, there was no stopping Hollywood. Time-travel films are now as numerous as the sands in an hourglass.

Science does enter the picture when time travelers go to the “future.” They give us insight into futurism, and futurism is a real science thing. These films can influence how we think about the future by speculatively taking us there and giving us a glimpse. Then we can contemplate what we think about that vision and what we can do with that knowledge.

Since thinking about the future is so important to surviving the present (as folks insist we grapple with every future threat from global warming to the proliferation of K-pop), it is worth thinking about how we think about what lies ahead. Film gives us one interesting and influential perspective.

Sadly, this means skipping future time travel films like Back to the Future (1985) and Ted and Bill’s Excellent Adventure (1989). These are not message movies. They are just feel-good cinematic rollercoasters, watched for the fun of the ride. Also, sadly worth skipping are really good thought-provoking time travel films, like Twelve Monkeys (1995) because it is too easy to get wrapped up in watching the movie and miss the message.

Better to focus on truly awful time travel movies. Bad time travel movies are an awesome window into the insecurities of popular culture. They are great at illuminating the Great Fear prevailing at the time they were made and pondering what we can learn from that.

Here is a list of the worst that have to be seen to be not believed.

#5. World Without End (1956) This is actually the very best of really bad time travel movies. The film has some darn good characters, plot twists, and acting, including Rod Taylor (who would later headline in The Time Machine, 1960, the first film version of H.G. Wells’ classic). A returning spaceship time warps into the future, landing on an Earth that has been devastated by nuclear war. Yes, that’s right. Planet of the Apes (1968) totally ripped off this idea. Instead of apes, however, these space dudes must deal with mutant humans, and their only allies are some wimp scientists living in an underground colony. What makes this movie truly bad are laughable special effects like a rubber giant spider and goofy costumes and sets. It is, however, very watchable and entertaining.

#4. Beyond the Time Barrier (1960). Same plot, except the human folly that destroys the world is a man-made plague. Our hero is a test pilot who flies to the future by breaking the “time barrier” in a jet.

#3. The Time Travelers (1964) Same plot, except our scientists enter the future through a portal in their lab that looks like a picture window. The amount of tedious dumb stuff in the movie makes it nearly unwatchable. The scientists living underground are served by androids. We get endless scenes of these geniuses building their robots by hand, prompting one to ask: “Hey boys, did you ever think maybe have the robots build the robots?” This movie was so bad it was spoofed by Mystery Science Theater.

#2. Journey to the Center of Time (1967). This film was billed as a remake of The Time Travelers, though why anyone would want to remake that movie is anyone’s guess. This time the scientists jet around in a time capsule that looks like a beach ball. They also find the remnants of humanity living underground. In a plot twist, the time travelers also jet to the prehistoric past and do a little Jurassic Park thing, before getting completely lost in time instead of space.

#1. Idaho Transfer (1973). Teenagers travel to the future on something that looks like a surfboard. There are no scientists living underground (probably could not afford the cast and sets). Most of the world is dead, presumably from some man-made environmental catastrophe. The ending makes no sense, but that’s overshadowed by the incredibly lame acting.

All these films share the pathology of the Cold War era, when many assumed that mankind would end up annihilating itself. They also share the practice of bad future thinking—taking one trend and extending it in a linear fashion into the future. Linear thought assumes that, if the threat of nuclear war or environmental pollution is bad now, it is only going to get worse. Ergo: It’s hopeless.

Hopelessness, however, is not a constructive way to think about the future of the human race. Films like this reflect a popular culture that wants us to give up and let others save us from ourselves by their agenda of abolishing war, nuclear weapons, oil, or whatever. Such thinking denies human agency and our capacity to make decisions, survive as a species and even improve the lot of humanity.

Today, the Cold War pathology of fearing the future is back. From China to climate change to racism, we are told we are doomed unless we hand all power and authority to the geniuses so they can save us from ourselves.

The truth is the future is unknowable until we get there. Better to focus on the future by being sensible about the present, eschewing utopian “solutions” to an imagined dystopian future.